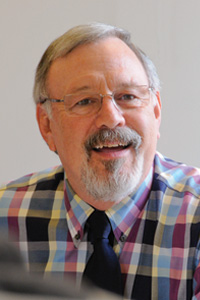 Withycombe, professor of rhetoric and film studies, came to Whitman in 1980 to direct the speech and debate team. In more than 13 years as its coach, he helped transform the team from a small, successful regional program to a consistently successful national team. He "stumbled upon the art of debate" when he was a college freshman and today still sees the benefits of involvement in a competitive speech program.

"I hope my students have learned that everyone has a duty to step up and make an argument; to be an actor and not just an observer," said Withycombe.

He has earned numerous honors at Whitman, including the annual Alumni Association Faculty Award for Service in 2009, the Town-Gown Award for Community Service in 2002, and the Thomas D. Howells Award for Distinguished Teaching in Humanities in 2000. In 2009 he was named the Washington Professor of the Year, an award sponsored by the Carnegie Foundation and the Council for Advancement and Support of Education in honor of extraordinary dedication to teaching.

"He is a teacher that students both look up to and want to talk with," said Jim Hanson, professor of forensics and colleague of 19 years, who took over the debate program from Withycombe in 1993.

“I hope my students have learned that everyone has a duty to step up and make an argument; to be an actor and not just an observer.”
— Bob Withycombe
professor of rhetoric and film studies

"He spends a lot of time preparing for each class, and it shows in the quality and specificity of the lectures he presents. He makes the extra effort to provide feedback for students on papers, and he spends extra time meeting with them. He is truly the ideal professor."

Next for Withycombe is some much deserved free time to read, be with family, including his wife, Nancy, and perhaps visit the only state in which he hasn't yet set foot, West Virginia.

When recalling his years spent in front of the classroom and in vans traveling around the country with debate students, Withycombe said there are simply too many memorable teaching moments to mention.

He will say, "I learned one of education's great ironies; the more we think there are no surprises left in the world, the more likely it is that our students will say or do something to surprise us. I guess the opportunity to find the unexpected is what has made the teaching/learning/mentoring process so special for me."