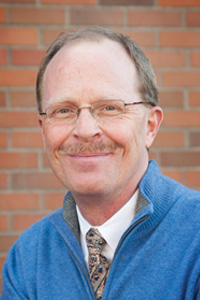 Lee Thompson, professor of music, will devote time to perfecting his craft, and performing as a freelance pianist and coach.

"My teaching philosophy has always been to be the most ardent advocate for students, in and out of the classroom," said Lee Thompson, professor of music, who joined the Whitman faculty in 1987 and teaches his final classes this semester.

"Inspired by his example, I strive to rise to the challenges he poses for me, and feel blessed by the amount of energy he has devoted to helping me succeed — from the small-scale success of getting a musical phrase 'just right' in a lesson, to the larger accomplishments of recitals and concerts," said Rachel Wishkoski '11, who has been a student of Thompson's since her first year at Whitman. "Dr. Thompson's encouragement has helped me to grow intellectually and personally, supporting me as I work to develop my own musical voice."

"He loves what he teaches. He teaches what he knows is necessary, regardless of loads or fashions," said Nancy Simon, Garrett professor of dramatic art. "He sets an example not only through his teaching and performance but through his life."

The recipient of the 2004 Thomas D. Howells Award for Distinguished Teaching in Humanities, Thompson lists his appointment by the U.S. State Department to serve as an American cultural specialist to the National Opera Theatre of Mongolia in 2000 as one of his most significant professional accomplishments. The six weeks he spent as the principal vocal coach and pianist for the theatre's first English language production were "musically challenging and culturally thrilling."

"Dr. Thompson has held me to the highest standard of any professor I have ever had, and it makes me want to not only achieve that standard but also surpass his expectations," said his vocal student McKenna Milici '11. "I love seeing what I can accomplish when I actually put everything I have into my work, and he is an incredible motivator."

Thompson's next move is to Kansas City, Missouri, to join his partner, Robert Bode, a former Whitman professor, and devote time to practicing the piano and performing as a freelance pianist and coach.

As he departs from teaching, he reflects on the fact that he often was a student in his own classroom. He learned countless life lessons from his students, including the importance of trust, the power of learning and "how very much I have loved being a teacher."