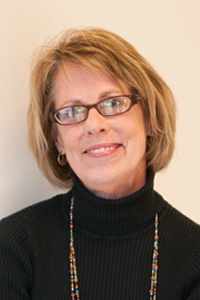 When Kay Fenimore-Smith, associate professor of education, closes her Whitman career after this semester, her next step may take her full circle, along a familiar path.

Fenimore-Smith began her career on the Umatilla Indian Reservation outside of Pendleton, Oregon, working with the tribes' adult-education program. From there, she moved to the Umatilla County Educational Service District (ESD), where she spent 11 years working with migrant and bilingual students in various school districts.

She married George Smith, a Walla Walla building contractor, two years into her ESD job, and commuted from Walla Walla to Pendleton for nine years before starting her own consulting business as a grant writer and evaluator. Among the organizations that she worked with was the budding Crow's Shadow Institute of the Arts — a nonprofit aimed at providing opportunities for Native Americans through artistic development.

Fate intervened when, in 1994, she rented a house she owned to new Whitman education professor Tom Callister and his family. Callister was rebuilding the department and looking for a few good educators to help him. Fenimore-Smith fit the bill.

Both Callister and Fenimore-Smith were infused with a desire to focus on the "why" of education and the importance of social justice in the increasingly diverse school populations.

"I feel good about the direction that Tom and I took the program, and that we approached teaching from a very humane perspective," said Fenimore-Smith. "We've always gotten feedback from teachers who hosted our student teachers or graduate programs for teaching certification that we produce really good students."

Callister, also in his last months at Whitman, said, "One of the very best things about working here was having Kay as my colleague and friend. In her selfless and unassuming way, she was instrumental in the success of the education department and the teacher certification program. Kay tirelessly mentored and supported dozens of students who now work successfully as teachers in public schools, and she ably served the college as chair of the department and as director of race and ethnic studies."

“I feel good about the direction that Tom and I took the program, and that we approached teaching from a very humane perspective.”
— Kay Fenimore-Smith
associate professor of education

Fenimore-Smith's path while at Whitman served to strengthen her already deep interest in multicultural education. In fact, "Multicultural Education" has been one of her favorite classes to teach. "It incorporates so much of what I've done in the past and the research that I'm doing currently with regard to Indian education," she said.

"I also loved teaching the methods classes when we offered teacher certification. I would have a couple of English majors, a history major, biology, maybe a math, and they would all be in the same methods class, so trying to provide instruction that would be meaningful to people who are coming out of various disciplines was always fun."

It was hard for her to let go of that program in 2006, as it is hard now for her to see the education department come to a close. "Students from Whitman still can go into education through graduate or master's programs. I'm just sad to see it go," she said.

When Whitman stopped the certification program, she didn't mind saying goodbye to the mounds of state paperwork. "I could never do research when I was doing certification."

When she returned to research, she found herself back on the reservation, this time studying curricular development and pedagogical processes at Nixya'awii Community School. The work on the reservation has been immensely rewarding, she said. "I feel like I've connected with Nixya'awii and helped contribute to the school."

Still, "I really do think my most significant professional accomplishment is what the students I've worked with at Whitman came away with. Many have written to me and said that taking my classes really changed their life and got them excited about education."

Fenimore-Smith, the 2007 recipient of the Robert Y. Fluno Award for Distinguished Teaching in Social Science, doesn't see her teaching career ending. "I like teaching too much," she said.

So what is next? "It's going to be a new adventure." She looks forward to spending some time at a small house at the Oregon Coast that she and her husband, now retired, are rebuilding from the studs up.

"I know that I'm going to continue my association with the tribes, although what form that's going to take I don't know," she said. "I'd really like to maintain stronger contact with the school than I've been able to when I'm teaching full time."

She also has been in contact with Crow's Shadow about working with them again.