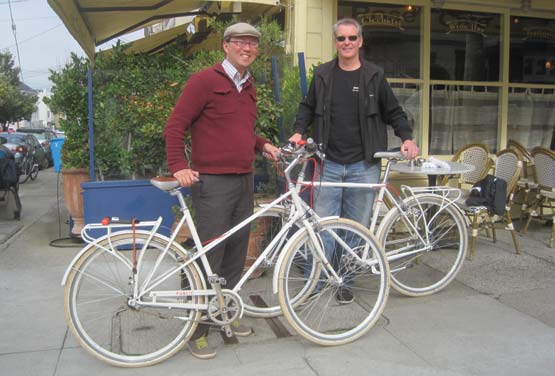 Dan Nguyen-Tan '96 and Ken Conner '81 find common ground in their Whitman connection and an entrepreneurial venture.

Though they graduated years apart from one another, Ken Conner '81 and Dan Nguyen-Tan '96 shared many of the same interests and activities while attending Whitman. Both were active in the Pioneer and KWCW radio station, and each was a member of his respective senior committee. Now the paths of these two alumni have crossed in San Francisco, where their shared passions for improving urban communities — and for really cool bicycles — have converged at a company called PUBLIC Bikes.

Launched in 2009 by Rob Forbes, founder of the hugely successful furniture and home décor company called Design Within Reach, PUBLIC Bikes offers a line of European-inspired commuter bicycles and accessories designed to "make riding enjoyable and chic." Conner is a private investor and board member at the company. As part of PUBLIC's founding team, Nguyen-Tan serves as the company's "PUBLIC Citizen," a title that entails anything from business development and marketing to test-riding the latest two-wheeled prototype, he said.

"When I first joined PUBLIC and met Ken, I was incredibly happy to learn he was a Whitman alumnus," said Nguyen-Tan. "Not only did he have a great business reputation, but knowing that he was a Whitman graduate, I knew we had someone on board with a broad-based skill set; someone nimble and strategic who would help guide this start-up business."

Conner said he enjoys serving as an adviser to Nguyen-Tan and the company's founding team — collaborating on projects and acting as a valued sounding board for new ideas. Together, they use the company and its products as a platform to support issues of urban transportation, healthy lifestyles and the development of more pedestrian and bicycle-friendly communities.

"Public spaces should be inviting and easily accessible to people from diverse backgrounds and income levels," said Nguyen-Tan, who would like to see more urban streets and public spaces reclaimed for walking and biking. "Whitman is a good example. The campus is known for its 'public commons,' like Ankeny Field and Reid Campus Center, where the vibrancy and social capital of the community truly come to life."