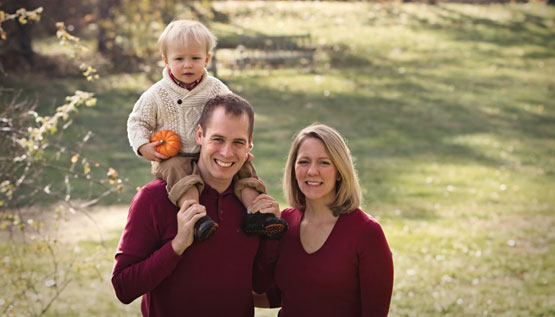 Aaron Perrine '99 and his wife, Paige Pratter, and son, Soren.

Service is a way of life for Aaron Perrine '99, recipient of the 2011 Pete Reid Award for Young Alumni. While earning a bachelor's degree in politics at Whitman, he worked as a resident assistant, served as ASWC treasurer and dedicated his time to a variety of other groups and activities across campus. Given his demonstrated willingness to give of himself, it was no surprise when, while on a study abroad program in Buenos Aires his junior year, Perrine was offered an internship with the Foreign Commercial Service at the U.S. Embassy there.

“I have really thought about those (Whitman senior seminar) discussions in every stage of my career — from trying to clear things through customs in Peshawar to convincing our commander in Afghanistan to let us do something the way we thought it should be done.
—Aaron Perrine ’99

His overseas embassy experience — coupled with an inspiring 1996 lecture given at Whitman by U.S. Ambassador Ryan Crocker '71 — had sparked something in Perrine that would forever change the course of his life and career. After completing his undergraduate work at Whitman, he enrolled in law school at the University of Washington, but his interest in foreign policy and service hadn't faded. He applied to join the U.S. Foreign Service, which is the State Department branch dedicated to carrying out U.S. foreign policy and aiding American citizens abroad. After taking the required intense written and oral examinations, he began the long wait for a potential assignment.

True to form for this textbook high-achiever, Perrine didn't sit back and wait for the State Department to call. In the three years that followed, he earned his law degree, completing a summer internship with a prestigious Seattle law firm. He was settling into the beginning of what he assumed would be a long legal career when, in 2002, he was offered, and quickly accepted, a position in Washington, D.C., as a Foreign Service officer. The following year, he successfully bid for an assignment to serve in Peshawar, Pakistan.

Assigned the role of management officer, Perrine led a 65-member team responsible for logistical and administrative support to the U.S. Consulate in Peshawar. Following this post, he moved back to Washington, D.C., where he spent a year as a current intelligence officer for the U.S. Bureau of Intelligence and Research. In 2005, with several years of domestic and foreign State Department work under his belt, Perrine chose to serve his country in a different way, and he enlisted in the U.S. Army.

After completing Officer Candidate School and Ranger School at Fort Benning, Georgia, Perrine was assigned to Fort Lewis, Washington. From Fort Lewis, he returned to the Middle East, this time deployed to support military efforts in Afghanistan and Iraq as a Ranger platoon leader with the 75th Ranger Regiment, the world's premier light infantry unit. After two combat deployments, Perrine returned home to his wife, Paige, and his now 2-year-old son, Soren, in March 2010.

Through State Department assignments and military deployments, Perrine said he has always carried with him the many lessons he learned at Whitman. "For example, our senior seminar was on different types of power. We learned about soft power, social power, power in groups," he said. "I have really thought about those discussions in every stage of my career — from trying to clear things through customs in Peshawar to convincing our commander in Afghanistan to let us do something the way we thought it should be done."

When his tactical time came to an end in 2010, Perrine left active military service and assumed his newest role as an MBA candidate at the Wharton School of the University of Pennsylvania, one of the nation's top business schools. While he now immerses himself in the study of management consulting and investment banking, he still makes time for his unwavering commitment to service. In addition to serving part time in the Pennsylvania National Guard, in January 2011 he happily accepted an invitation to join Whitman's Board of Overseers.

"I'm really excited to increase my involvement with Whitman College," he said. "The way I look at the world, what I think is important, how I understand day-to-day politics and economics — I developed all of that at Whitman."

Editor's note: Perrine also has served Whitman as a class or associate class representative since 2000, and he was the 10th Reunion Fund co-chair.