A lifetime teacher and a Renaissance man have each been awarded the Alumni Association’s 2011 Sally Rodgers Award for Lifelong Achievement. The award, bestowed biennially, honors alumni who graduated more than 50 years ago and whose lives exemplify the qualities of a liberal arts education. This year’s honorees are Brian Griffin ’54 and Harold Valentine ’51. 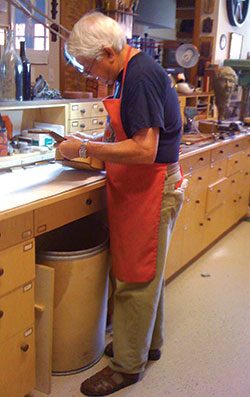 Brian Griffin ’54 works on a ukulele in the woodshop at his Bellingham, Washington, home.

Griffin’s delight when he talks about any one of his hobbies and interests is reminiscent of the "childlike fascination of nature" that he so admired in his biology professor, Art Rempel.

"I was always fascinated by the natural world, but surely Art Rempel magnified that interest. His enthusiasm was contagious," Griffin said. So, too, is the joy evident in Griffin’s voice when he is standing in his workshop "surrounded by this magnificent spruce, maple and cedar," tonewood that he will transform into musical instruments.

While raising bees, he also made time for another passion, writing. He authored "The Orchard Mason Bee," a book that sold more than 30,000 copies and "Humblebee Bumblebee." "The Urban Farmer," a newsletter he authored, is interesting reading for backyard farmers and still available at knoxcellars.com.

"Whitman taught me to write," he said. "The writing and beauty of language are synonymous. They flow together. Writing and speaking are the foundation of any success and surely any joy I’ve had in life." 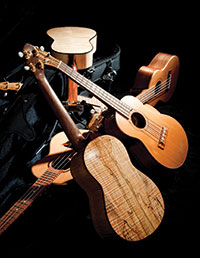 A collection of ukuleles crafted by Griffin.

He has employed those skills to great success in support of his community of Bellingham, Washington, including spearheading the public-private partnership to build Depot Market Square, a farmers market and public meeting place, and Fairhaven Village Green, a unique pocket park. His passion for his community was nurtured in Walla Walla and at Whitman. "Walla Walla is unique because you’re in the womb of a warm community, and you’re not distracted as you might be in a big city," he said.

The idea for his latest family venture, House and Mill Tonewood, was born after he toured a Skagit Valley mill that cuts and sells wood to such renowned guitar manufacturers as Martin Co. and Taylor Guitars.

As the tour came to a close, "they were grading these beautiful pieces of wood, 22 inches long and 9 inches wide, spruce, with perfect grain, three-eighths-inch thick, and about every fourth piece of wood went in the throw-away bin. If it’s got a little flaw, they can’t sell it to the guitar companies, so they just turn it into sawdust," he said.

"That haunted me all the way home."

Back in his workshop, he realized that by cutting off the blemished section, he could transform the beautiful "scraps" into ukuleles. Joining him in the family venture are another daughter, Erin Christi, her son Evan and Evan’s fiancée Megan Giese.

Lately, when he isn’t making ukuleles or writing local history books, Griffin enjoys his training and research as a museum docent for the Whatcom Museum of History and Art, and last summer as narrator for a series of evening history cruises on Bellingham Bay. 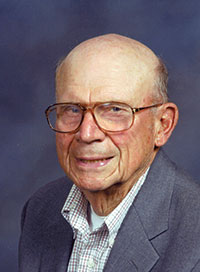 Harold Valentine ’51 came to the realization later than many of his colleagues that he was born to teach, and he continues to follow his passion long after they retired their chalk.

After Whitman he served in the Korean War, earning a Bronze Star. He then entered the business world, but five years into it, he made a U-turn and headed to the University of Washington, where he earned a teaching certificate and master’s degree in political science in 1965. He taught for few years and earned his doctorate in education from Washington State University in 1975.

He was a 30-year-old rookie when he began teaching social studies, politics and contemporary world problems at Auburn (Washington) High School. In his 30-year career there, he enriched his classroom curriculum by spending summers traveling the world — 38 countries in all — in his quest to better understand the people and cultures, and to share those insights with his students.

After retirement, he spent 17 years teaching a class for senior citizens on contemporary concerns. Today, he’s come full circle, still in the classroom, volunteering to teach second-graders in his daughter’s classroom how to read.

Teaching never gets old because you are continually learning from your students — no matter their age, Valentine said. “They will respond to things you do in unusual ways. If you can make a difference in half-a-dozen students’ lives, that’s what a teacher is trying to do.”

Valentine counts Whitman professors among those teachers who made a difference in his life. Chester Maxey fueled his passion for political science. Tommy Howells “told stories and knew his subjects (English and literature) so thoroughly that I find myself today still referring back to things he said.”

Valentine also has remained true to his other passion, politics. He is known for his letters to the editor on issues of local, national and global concern, and his work to pass school levies in his community.

The teaching tradition that he and his wife — the late Marilyn Bird Valentine ’51, a longtime middle-school teacher — began many years ago continues today with their two daughters and two granddaughters now at the head of their own classes.