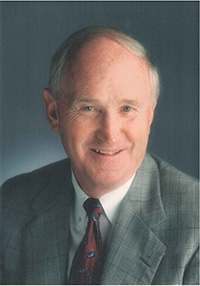 Max Johnson ’59 answered the question "Why Whitman?" in detail in an Annual Fund publication just seven years after his graduation. Among his selling points: faculty excellence and accessibility, high academic standards and valued extracurricular activities.

Nearly 45 years later, the veteran telecommunications executive sums up his reasons this way: "I owe just about everything I’ve accomplished to what I learned at Whitman."

Johnson’s "overall leadership and support of Whitman are a model for us all," Polly Schmitz ’83, assistant vice president for alumni relations, wrote in the letter announcing Johnson as the recipient of the Alumni Association’s 2011 Gordon Scribner Award for Distinguished Service.

Johnson served the college as an overseer from 1970 to 1986, including four years as vice chair and three years as chair, and as a trustee from 1986 to 1995. He then was named trustee emeritus. The college’s last four-sport letterman, Johnson was inducted into the Whitman Athletics Hall of Fame in 2005 and recently joined the W Club Board.

“I was raised in a small town in Idaho. I was unaware of life’s possibilities when I came to Whitman, but the college helped me develop confidence and the knowledge that if you really set your mind to something you can accomplish it.”
— Max Johnson ’59

The son of a teacher, Johnson came to Whitman on a scholarship after graduating from Nampa (Idaho) High School. He worked his way through Whitman as a fry cook in the SUB, and he spent his summers in Walla Walla, working at a cannery and as a counselor at Stubblefield Home for abused boys. An economics and business administration major, he earned Phi Beta Kappa honors and served as president of his senior class.

After Whitman, he earned his master’s degree in business economics from Claremont Graduate University in California. During his 40-year business career he was an executive with Pacific Northwest Bell, AT&T, U S WEST and Product Development Corporation.

"I was raised in a small town in Idaho," Johnson said. "I was unaware of life’s possibilities when I came to Whitman, but the college helped me develop confidence and the knowledge that if you really set your mind to something you can accomplish it."

Key to that realization was the opportunity to participate in athletics, where he learned life lessons and leadership, teamwork and the rewards of hard work. "When I played sports, I did better in the classroom."

In retirement, he and his wife, Margaret "Maggie" Iversen Johnson ’58, travel between winter and summer homes in Arizona and Washington. They focus their volunteer work on Whitman, which they always have made their priority.

"Whitman is a big part of our lives, and we’ve enjoyed being involved with the college for the past 50-plus years," Johnson said. He was "surprised but delighted" when he received news of the award. "I am very honored. I got to know Gordon Scribner (class of 1942, a former dean of students and director of alumni) when I was an overseer and trustee. I have a great deal of respect for him, so it is very special to receive this award."

The Johnsons have two daughters, Laurie Johnson ’83 and Lisa Johnson, who graduated from Southern Methodist University, two sons-in-law and one granddaughter.