Commencement 2011 was held on the Memorial Building lawn, as it has been since 1983 when it was moved from the Amphitheatre. The ceremony had been held in the outdoor venue since 1917. From 1904 (shown below) to 1916 it was held on the east Memorial lawn.

Said in 2001:
When the enormous tasks seem intractable, you might try doing passionately and intimately the small good thing that makes a difference for the lives at your elbows. For these humble acts build the present and future as surely as anything else.
Tess Gallagher
poet, short-story writer and essayist 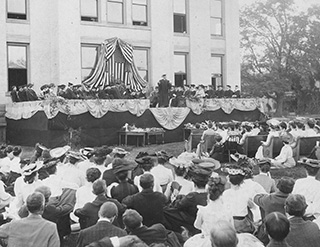 The south lawn of Whitman's iconic Memorial Building was awash in a sea of blue caps and gowns — punctuated by waves of yellow tassels — as the graduating class of 2011 gathered on Sunday, May 22, for its 125th Commencement ceremony. The event crowned a celebratory weekend of activities, including the 50-year reunion of the Class of 1961 and the college's traditional Baccalaureate.

This year's Commencement speaker and recipient of an honorary doctor of humane letters was Meda Chesney-Lind '69, an accomplished alumna who is professor of women's studies at the University of Hawaii at Manoa (See Honoreary degree recipient: Young women face better world today). Nationally recognized for her work and advocacy on women and crime and the author of seven books on the subject, her address, titled "But What Was it Like For Women: The Art of the Dumb Question," drew from her knowledge and experience in the gender-equality movement. 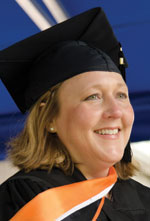 At the ceremony, Whitman continued its tradition since 1983 of honoring elementary, middle and/or high school teachers who have made a difference in the lives of the college's seniors by awarding a Distinguished Teaching Award to Sandra Sadler Whiton, academic intervention specialist at Chief Sealth International High School in Seattle, who was nominated by Ella de la Cruz '11. 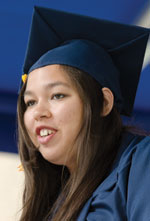 De la Cruz was one of 378 graduates who earned degrees. Another was student speaker Esther Weathers '11, from Guam, whose speech was titled "We Think We Know it All." Weathers served as an Intercultural Center intern for all four of her Whitman years and, after graduation, she plans to volunteer with agencies that support abused children.

"We all come with the idea that answers will be revealed while we are in college, however, the secret to college is that it is a place to wander and find questions," Weathers said. "By being lost we are able to uncover things that we never expected and become people we never thought we could be."

Visit the Photo Galleries for photo galleries of the 2011 Commencement and Baccalaureate and to watch videos of the speeches. 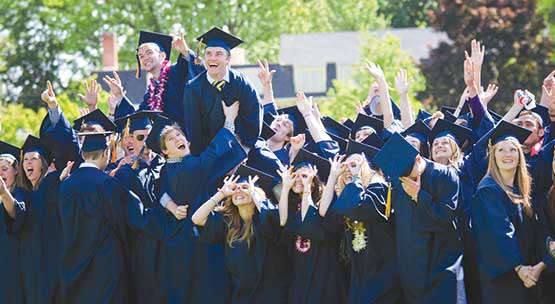 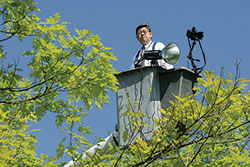 (Above) There is always room for a little silliness when the seniors get their official class portrait taken by professional photographer Marty Huie, pictured at right in 2011. He has photographed the graduates for the past 30 years.