Long-standing traditions live on in 2011 ceremony 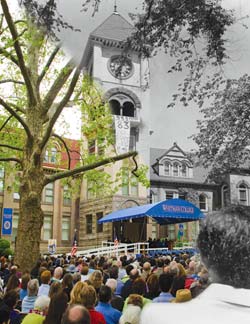 The past morphs into the present in these scenes from the 1983 and 2011 Commencements, both on the front lawn of Memorial Building. Photo illustration by Greg Lehman.

As members of the Class of 2011 celebrated the culmination of their Whitman experiences in May, the college marked a significant milestone of its own — its 125th Commencement. This year’s 378 graduates are a testament to the educational process and continued personal growth and development that has occurred since the college’s first graduation — held for just two men and two women in 1886.

Setting sail with Whitman’s inaugural Commencement 125 years ago, poetically, a graduate named Christopher Columbus Gose ’86, an alumnus who went on to serve a number of civic roles until becoming a lawyer, being elected to the State Bar Association and serving in the Washington State Legislature.

Said in 1969:
This generation should continue to be the conscience of the nation. It should serve to remind us constantly that man is mortal and that institutions are permanent only so long as they serve our people. It should continue to probe, to question, to cry out against injustice and corruption and decay. And most of all it should dare what others only dreamed.
Gov. Dan Evans
Washington State

Just as the campus and curriculum have advanced to reflect changing times, Whitman’s Commencement traditions also have evolved with new generations of graduates. In the early- to mid-20th century, Commencement was a weeklong event that included oratory contests, tennis tournaments, governing board meetings, an all-college picnic and a formal dinner with prominent guest speakers. Commencement and Baccalaureate now take place during a single spring weekend with special activities planned for the 50th reunion class. Instead of a small group of graduates and guests gathered in a local chapel or at the outdoor Amphitheatre, today roughly 4,000 people converge on the south lawn of Memorial Hall.

In place of the essays and orations presented by each graduate in the college’s earliest years, present-day ceremonies feature one prominent guest Commencement speaker and a single student speaker chosen by peers to represent the graduating class.

But while the program, venue and size of the event have evolved, the distinctive spirit of Commencement remains as meaningful today as it must have been for those first four graduates. In honor of Whitman’s 125th Commencement, these pages share reflections from members of the classes of 1961 and 2011, and look back on the history, highlights and cherished memories of graduation ceremonies through the decades — revealing insight gleaned from the college’s archives and personal accounts from Whitties. 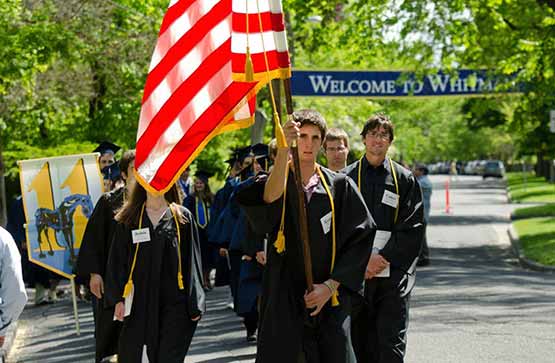