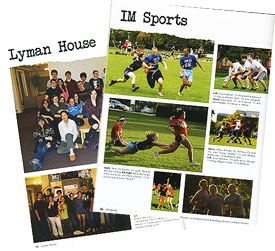 Last fall Kimberly Sommers ’11 was walking through Reid Campus Center when she came across two friends conspiring on the couches. Ben Lerchin ’13 and Gary Wang ’11 were thinking ahead about remembering the past, and Sommers wanted to hear more.

"The idea of a yearbook, especially as a senior, is very appealing and extremely feasible at Whitman," she said. "The question came up: ’Why don’t we have a yearbook here?’"

The efforts of this enthusiastic trio and a cohort of about 15 other Whitties brought back the "Waiilatpu" this May. "Waiilatpu" means "Place of the Rye Grass" and was the Cayuse name for the site where the Whitman Mission was built.

This is the 73rd edition of the yearbook, but is the first volume published in 14 years. The 2011 "Waiilatpu" is a 120-page soft cover, full-color volume primarily filled with photography of residence and Greek life, sports and campus organizations, and the arts.

"I believe this a great step for the Whitman community that will help to strengthen collegiate bonds and serve as a lasting snapshot of our Whitman experience," Sommers said.

The yearbook was consistently published for decades after its inception in 1906 but lost momentum over time due to dwindling student interest. The "Waiilatpu" was only published once between 1991 and 1993, and as a result ASWC cut its funding in 1994. The yearbook briefly returned in 1997 but has not been published since.

It was Wang who wanted to bring the yearbook back: He had campaigned for the job of ASWC president on this platform during the 2009-10 academic year. Although last year’s campaign was unsuccessful, Wang had no trouble in the 2010-11 academic year finding an enthusiastic yearbook staff, including editor-in-chief Lerchin, marketing directors Sommers and Leah Wheeler ’11, layout editor Miriam Kolker ’13 and photo editor Sally Boggan ’13. Wang is the yearbook’s publisher.

Although the yearbook staff didn’t receive approval for ASWC funding until February 2011 — $11,911 for 350 yearbooks — they have made the most of their time and resources. In addition to six designated yearbook photographers, the staff held a photo competition in February to solicit photos directly from the student body, and also have collaborated with The Pioneer and Office of Communications photographer Greg Lehman to collect as many photos as possible. Yearbook staffers say help from the post office and bookstore staffs also were key to the success of the project.

"The work the students have done to get this yearbook off the ground is fantastic. Their dedication to securing funding and making it happen in such a short amount of time is itself an argument to how important a yearbook is," said Jason Arp ’94, assistant director of alumni relations.

The response from students was incredibly positive," Lerchin said. "I think everyone who purchased a book has been impressed and appreciative of how much work we put in." Sales went better than expected, according to Sommers. "More than 85 percent of the yearbooks were sold during our week of presales and more than 130 of them on the first day alone," she said. As of mid-May, only eight books were left, and she expected they would be snapped up before the end of the academic year.

Alumni also are excited about the return of the yearbook. Arp emphasizes the accessibility and permanency of the yearbook compared to digital records of student life on social media such as Facebook or Flickr.

"Yearbooks are so important for documenting the life of the school and making those memories available to everyone," Arp said. 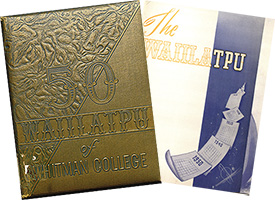 The outside cover, left, and inside cover of the 1950 “Waiilatpu.”

Cathy Highberg Williams ’70, past chair of the Alumni Association’s Documenting the Past Committee, agreed.

"When you get to be 20 to 30 years out of college, it’s fun to pick up a book and see what was happening when you were on campus, and, of course, to laugh at the hairdos and clothes. Before coming to a reunion one needs to refresh one’s memory with names and faces. How would you do this 30 years from now if Facebook is no longer available?"

Sommers recognizes the long-term benefit, too. "Hopefully, this is something that will be received well by the community today, but I think that the potential and value won’t be fully recognized until 20 years from now when we come back for our own reunions and can look back on this," Sommers said.