Basketball player Justin Artis ’11 and tennis players Elise Otto ’11 and Etienne Moshevich ’11 are winners of the 2011 Borleske Trophies, which are given annually to the top male and female athletes on campus. The trophies, awarded by a vote of the Whitman coaching staff, recognize athletic ability and accomplishments, leadership and sportsmanship qualities, and contributions to the campus as a whole.

Artis played a critical role the past two seasons in resurrecting a long dormant men’s basketball program. The only senior on last winter’s team, Artis led Whitman to its best season in 25 years. Whitman won a school-record eight straight games at one point, knocked off previously unbeaten and top-ranked Whitworth, and made the NWC playoffs for the first time in 11 years.

Otto capped each of her four seasons by earning spots on the All-NWC First Team. Conference coaches also named her NWC Sportswoman of the Year at the end of her senior season. She finished her Whitman career with more than 130 victories in singles and doubles. She earned ITA All-American honors in two of her last three seasons on campus.

A total of nine student athletes received annual Outstanding Performer awards this spring in a vote of the Whitman coaching staff.

Conor Holton-Burke ’12 was named NWC Player of the Year for a men’s tennis team that won its fourth consecutive NWC championship and earned its fifth straight berth in the NCAA Division III national championship field. He is the seventh Whitman player to snare the top prize in the last 11 years and was joined by Etienne Moshevich ’11 and Andrew La Cava ’14 on the eight-man All-NWC First Team. Jeff Tolman ’13 earned a spot on the All-NWC Second Team.

Whitman, after extending its NWC regular season winning streak to 78 matches, lost to Wisconsin-Whitewater in the second round of the national tournament. Both Holton-Burke and Moshevich were twice named NWC Student-Athlete of the Week for men’s tennis. 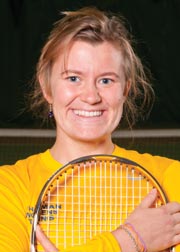 Elise Otto ’11 was voted to the All-NWC First Team for a fourth consecutive season. Conference coaches also picked Otto as their Sportswoman of the Year this spring. She was joined on the All-NWC First Team by Alyssa Roberg ’13, who received that honor for the second time in two seasons. Kate Kunkel-Patterson ’13 received Honorable Mention.

The women’s team finished third in the final regular season standings after dropping narrow decisions to both Linfield and Whitworth. Otto was twice named NWC Student Athlete of the Week, giving her five such awards for her career; Roberg won the award once this spring.

Katie Zajicek ’14, who earned All-NWC Honors by winning the Spring Classic, led the Whitman women to the best season in program history. With a roster of six first- and second-year players, Whitman finished second at the NWC Championship Tournament to nail down second place in the final season standings.

Zajicek also was named NWC Student Athlete of the Week for women’s golf after winning the Spring Classic by six strokes. It was the first-ever victory for a Whitman woman in one of the NWC’s three primary tournaments.

Richards and left-handed pitcher Jake Nelson ’12 were named NWC Players of the Week in mid-March after Whitman swept a doubleheader from Lewis & Clark. Richards was picked as that week’s top position player after he collected six hits in nine at-bats while Nelson tossed a complete-game three-hitter in one of the games.

Add one more major award for a men’s basketball team that enjoyed its best season in two-plus decades this winter before falling just short of a berth in the NCAA Division III national championships. Shortly after the last Whitman Magazine went to print, the D3Hoops.com website named Josh Duckworth ’14 as its West Region Rookie of the Year. Duckworth, Whitman’s second-leading scorer during the season, scored 24 points and grabbed eight rebounds in sparking the Missionaries to a thrilling comeback victory over previously undefeated and No. 1-ranked Whitworth.

Skip Molitor, who coached the men’s basketball team for 14 years before stepping down after the 2007-08 season, was honored in April by the National Association of Basketball Coaches with its Outstanding Service Award. Molitor is assistant athletic director and women’s golf coach.