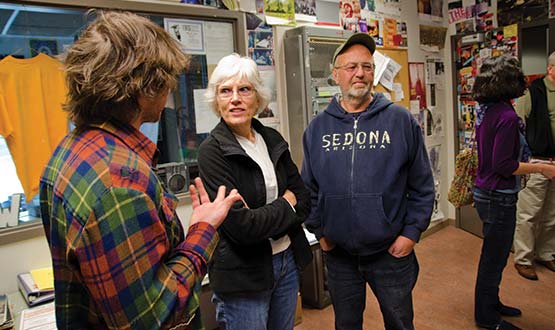 K-Dub through the years

1989: On the air (left to right) Gina Scollard ’90, Chris Fetters ’90 and Alan Thomas ’90 broadcast from the station in the Student Union Building.

2011: Jeremy Howell ’13, standing, Matt Raymond ’13, with the hat, and a third staffer in the studio overlooking the Reid Campus Center foyer during the station’s open house in April. They tried, unsuccessfully, to get alumni staff to go on the air.

"Sports, news, weather and GOOD SOUNDS. Wednesday nights, Groovy Stu Allen and the Mind Liberation Front get it on with the powe-r-tokes of Rock and Roll and Rhythm and Blues. The ’Groov’ recommends his show for those psychologically addicted to the sounds of today."
— The Pioneer, February 1971

With 10 watts, a state-of-the-art transmitter, a single-bay antenna and a high-fidelity FM signal, KWCW went on the air in January 1971, one of the first student-licensed and -operated radio stations in the country.

It was in 1969 that Gary Schiedel ’72 first proposed the idea of a campus radio station to Craig Gunsul, now a professor emeritus of physics. Gunsul helped students find funding and equipment for the station, as well as a name.

"Our first choice for call letters was a Zen Buddhist term KOAN, but a Tri-cities station KONA was too similar," Gunsul recalled. "I think Lauri Powers ’72 came up with KWCW. He rather liked the CW part, a nice resonance with Continuous Wave."*

Following the discovery of a forgotten ASWC savings fund, the burgeoning radio club had no trouble convincing Whitman students to invest in a campus radio station.

In April 1971, there were nine student operators and 30 more in training, but within a year the radio station had become one of the largest student activities on campus, with 50 to 60 students involved.

Gunsul remembers Searfoss as a dedicated and "relentless" station manager.

"He listened all the time and was on the telephone immediately if a DJ was allowing too much dead air time."

It was only on rare evenings that the station signals faltered — a curious anomaly that Searfoss and his friends could only attribute to an errant bird.

"At night, the transmitter indicators would give readings that were nearly out of proper operating ranges. Normally they were fairly steady all the time. All we could think of was an owl perching on the antenna" — a single ring just 20 inches in diameter.

At first, KWCW only broadcast after 4 p.m. each day, but by 1981 the station was on the air 21 hours a day, signing off at 3 a.m. and returning to the air at 6 a.m. Today, KWCW broadcasts live from 8 a.m. until 2 a.m, said general manager Matt Bachmann ’11. On the off-hours, an auto-DJ system continues to cycle promotions, station IDs and music tracks.

From the beginning, KWCW was unusual in offering what a 1981 Whitman magazine article calls "a rainbow format," that is, the freedom for disc jockeys to play what they like, without the imposition of a required playlist.

"I think you’ll find that the reason for KWCW’s success over the years has been the clear, founding principle that it was going to be open — with time and space for everybody that wanted to have access," said Searfoss in a 1989 Whitman magazine. Although interested students had to travel all the way to Seattle to obtain the required third-class FCC license, students were willing to drive the 500-mile round trip for their hour on 90.5 FM. 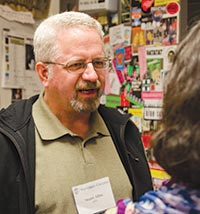 "Groovy Stu Allen," Stuart Allen ’71, one of the station founders, recalled a common station dictum: "We play what we want and say what we think."

Allen was among alumni who returned to visit the station during the 40th reunion of the Class of 1971, held in April 2011. Returning KWCW staff found quite a different setup than the one they left 40 years ago in the old Student Union Building. Since 2002, KWCW has made its home on the mezzanine of Reid Campus Center. The studio directly overlooks the main entrance.

Standing in the new studio, Cindy Luppold-Stella ’71 remembered how KWCW gave her the freedom to play her particular favorites. She hosted the first folk station on KWCW her senior year, and remembers queuing up James Taylor records in that "one great big room" in the old SUB.

"I believe that the free format allows for much more creativity in programming and also allows DJs to play or talk about what they know rather than being forced to play what we dictate to them. KWCW shows such as ’Channeling Ashtar’ — which features poetry, French critical theory and other great literary readings — would not be possible on these fixed rotation stations," Bachmann said.

Foo agreed: "The free-format gives KWCW more character and is a better representation of the voice of the college and Walla Walla."

"A great start in a career"

KWCW has not only been a way for students to have a good time but also to gain technical expertise and experience in radio journalism.

"We have the largest news staff of any medium in the Walla Walla area, and hope to fill the news void which exists, especially in local broadcast journalism," said news director Doug Eglington ’72 in a 1971 edition of The Pioneer. Early KWCW news stories included a story on the Young Americans for Freedom demonstration during President Richard Nixon’s visit to Walla Walla.

Students involved in KWCW have taken their communications capabilities far beyond their Whitman years. 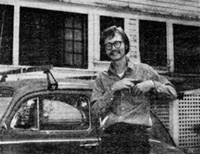 Robert Searfoss ’71 "grins happily over the news of the FCC’s approval" of the station’s permit in this photo that ran in a September 1970 Pioneer.

Searfoss traces all the jobs he has worked in his life back to KWCW, from conducting radio interviews for Washington State University to developing a health care teleconference network to inventing television equipment. His work at KWCW, he says, gave him "a great start in a career related to communications."

Within the last four decades, both student participation in KWCW and the radio signal itself have grown tenfold. From nine student operators in 1971, KWCW’s 100 watts now broadcast the voices of 90 to 100 student DJs across the Walla Walla Valley.

For Searfoss, KWCW was "all for the students," but over the decades, KWCW — known to many as K-Dub — has grown into a community station.

Most recently, Bachmann has worked with local music store Hot Poop to create a "KWCW Recommended" section, which he hopes will help foster student support for the store, and also contribute to the growth of music in Walla Walla. KWCW sends its top rotation charts and record reviews for publication in the Walla Walla Union-Bulletin.

"I think that it is important for KWCW to be involved with the community because KWCW is a community radio station," Bachmann said. "Some of our best and longest lasting shows are hosted by community members. KWCW is not just Whitman’s station; it’s Walla Walla’s station."

See kwcw.net for more about the station.

* Continuous Wave: an electromagnetic wave of constant amplitude and frequency.