November 1969
With the arrival of editor S. Eugene "Gene" Thompson, The Whitman Alumnus name makes a comeback, with a tagline: "Whitman College Bulletin."

February 1984
Whitman — The name remains but the tagline goes away. The magazine features its first full color photo (a two-page spread of students on Ankeny Field) in August 1984 issue.

Fall 1992
Whitman
The masthead now has a new "woodcut look." 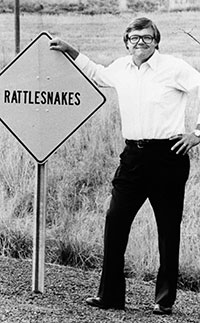 From 1969 to 1985 nearly every issue of The Whitman Alumnus — there were 64 in all — opened with editor S. Eugene Thompson’s personal commentary on the current campus climate. His open letters to readers, always signed with his initials S.E.T., explored high-profile campus news of the day, from race issues to residence life, from trouble over a football jersey for a U.S. president to tributes for campus legends.

Gene Thompson, as alumni and colleagues knew him, passed away March 16, 2011, in Iowa City, Iowa.

Former President Robert Skotheim, whose tenure from 1975 to 1988 overlapped Thompson’s time at Whitman, recalled that Thompson’s editorship of the magazine was unique. “He was not a spokesman for the administration or any other single group. His wise perspective derived from his small-college education at Grinnell College, where he was later dean of men in the turbulent 1960s, and his experience at Whitman in the 1970s and 80s,” said Skotheim. “He was sympathetic to everyone with a problem and a critic of everyone who exercised power capriciously.”

Thompson’s role as editor was just one aspect of his larger responsibility as director of publications. He also reorganized the Central Stenographic or “the alumni office mail room” into Central Services as its new director. In the process, he brought in old printing equipment, culled from retired local printers’ attics and barns, and built a working letterpress shop in the basement of Memorial Building, a sort of working museum.

During his years at Whitman he earned numerous awards for excellence in publication writing and design.

“He took us from pretty bland publications to excellent ones based on the words and opinions alone,” said Larry Beaulaurier, then vice president for development. “We prided ourselves in the scarcity of pictures and graphics, likening our catalogs and Commencement publications to the Ivy League.” In the magazine, Thompson was the first to employ spot color on the cover and to add his personal trademark, his quarterly remarks for the good of the order.

“Every periodical that pretends to be meaningful to its readers should have a place for editor’s remarks,” he wrote in his first issue. “First, there is always that occasional need of the editor to explain himself: this is the sort of vocation in which, if you are not careful, you publish your mistakes. In addition, editors are too often entitled, by custom and public indifference, to hide behind the scenes just at the moment when readers need most to hear the editor talking, to see if he is in possession of his Right Mind (preachers, politicians, and professors have to take these chances, and it seems only fair that editors ought to, too.)”

Beyond Thompson’s pithy, pointed magazine commentaries, he made a significant impact on the college’s other key communications with alumni, Beaulaurier said. Under the leadership of President Louis Perry, the college was beginning to explore the value of growing the endowment, and the steadying effect such growth had on eastern schools, Beaulaurier said. The focus on endowment continued through the tenures of President Donald Sheehan and Skotheim.

“We had to educate our whole public about what an endowment was and what it could do for the college. It was that kind of writing that Gene was so helpful with,” Beaulaurier said. “We struggled mightily with the language, to good results I think.

“We were the first in the Northwest … no one else was seeking to grow their endowment in the same way.” It wasn’t long before other schools followed suit.

Before coming to Whitman in 1969, Thompson served as the Grinnell alumni magazine editor after beginning his career teaching in Iowa and Wisconsin. At that time, he was married to Elma Johnston, and they had two children. After Whitman, Thompson took over direction of publications at Reed College in Portland.

In retirement, he moved to Coralville, Iowa, where he was a radio-control airplane hobbyist with the Iowa City Aerohawks. He continued to nurture his passion for writing through his blog, Forever73, and to dabble in publication production through the company he founded, Dryland Sailor Publishing, which produced the annual Iowa craft show and art fair directory.

Gene is survived by his partner, Caitlin Robinson; two sons, Benjamin ’83 and Daniel; and a brother, Lawrence. He was preceded in death by a brother, Leonard.