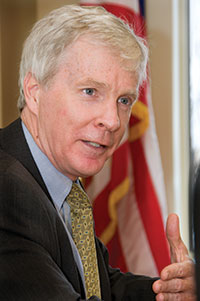 Retirement from a 37-year career in the U.S. Foreign Service didn't last long for Ambassador Ryan Crocker '71, who is again stepping into the Middle East fray. Nominated by President Barack Obama, Crocker, if confirmed, will serve as ambassador to Afghanistan, replacing Karl Eikenberry. (Confirmation pending at press time.)

The news of Crocker's nomination for the post came in April 2011, the same month that the Association of the United States Army (AUSA) announced it had awarded him the 2011 George Catlett Marshall Medal, the highest award presented by the organization.

Crocker is no stranger to Afghanistan. In January 2002, he was sent there to reopen the American Embassy in Kabul. He subsequently received the Robert C. Frasure Memorial Award for "exceptional courage and leadership" in Afghanistan.

Crocker, who has served as ambassador to Iraq, Pakistan, Syria, Kuwait and Lebanon, retired in 2009, and, with wife Christine, returned to his hometown of Spokane, Washington. He served as a Whitman overseer from 2005 to 2010, when he was elected to the Board of Trustees. After his 2009 retirement from the Foreign Service, he visited campus several times to lecture, meet informally with students and attend board meetings.

Service as a U.S. ambassador requires him to step away from his position as a trustee, but Whitman will look forward to his reappointment once this new tour of duty is complete.