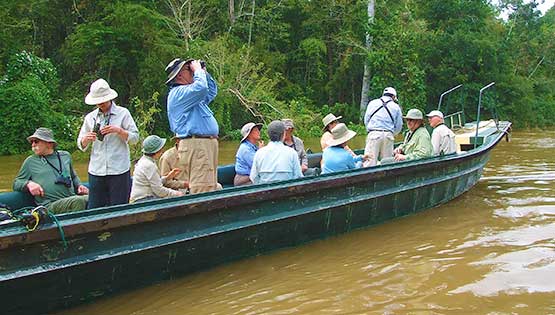 During the day, the group left the riverboat to explore the rivers by skiff. 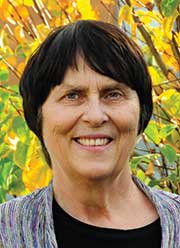 Whitman alumni, parents, a faculty member and staff set sail on an Amazon voyage in March 2011. Here, Linda King Brewer ’66 shares the journey, from the wonders of the Amazon River to the joys of exploring it with a biology professor’s insight and the camaraderie of friends, ones she has traveled with before and new ones, too.

There we were, 28 of us on two skiffs on our first morning on the Amazon. It was an early morning with no hint of rain, and we were excited to be on the move after a day of traveling and an evening arrival onto La Amatista, our riverboat home for the next week.

This is a mighty river! One of the more dramatic events of the trip happened before our eyes: The river swallowed a 25-foot tree as a portion of bank collapsed. The bank of the river is constantly eroding, and we had three or four similar sightings during the next hour.

I was ready to be nervous about the jungle, but grew to appreciate the constant movement of the river, the endless array of debris floating along — trees and plant life, the occasional spotting of small outboard motor boats or dugout canoes carrying people and goods. The river is so wide that it did not have the closed-in, damp feeling I associate with jungles. I had imagined possible dangers, but none materialized. Mostly there was annoyance from mosquitoes and other bugs.

For more photos from this trip, including beautiful photos of the wildlife, see this issue’s photo galleries.

The Amazon is the second-longest river in the world with an average discharge greater than the next six largest rivers combined. It accounts for approximately one-fifth of the world’s total river flow. The tributaries run through an extensively forested area that floods — the river rises more than 30 feet — every rainy season, January through June. More than one-third of all species in the world live in the rainforest. It is the richest tropical forest in the world in terms of biodiversity. Our guides helped us encounter more than 125 different species of birds and mammals, including the pink river dolphins and the Amazon Manatee, one of the largest freshwater mammals.

Our Whitman group filled the riverboat. We were 23 Whitties and partners; two parents; Delbert Hutchison, associate professor of biology, and his wife, Kathleen Hutchison, division assistant, social science; and Margaret Hoglund, trip organizer from the alumni office. Some of the group had traveled together before, and for some this was their first Whittie trip. This was the inaugural international journey for one person.

Our 10-day trip included one day in Lima and seven days on two tributaries of the Amazon, the Ucayali and the Maranon rivers. The confluence of these two rivers marks the beginning of the Amazon. A majority of the group joined the side excursion to Cusco and Machu Picchu.

In Lima, we had a morning guided walking tour of the downtown historical area, including the Plaza de Armas, La Iglesia de San Francisco, a colonial cathedral with underground catacombs containing 25,000 human femurs and skulls from burials that spanned more than three centuries. We also visited Casa de Aliaga, a private mansion owned and lived in by the same family since 1535.

Then we departed by air for Iquitos in Eastern Peru, followed by a bus ride of two hours and an evening arrival onto the boat. For the seven days on the boat, with explorations of smaller streams, riverbanks and lagoons, we contacted solid ground on only two days. This is quite a remote area, and due to the vast amount of water, there is little solid land and no road infrastructure. We saw a few small villages (100 to 200 people) and occasional outboard motor boats and rafts. There are vast stretches of open waterways with no visible signs of human intervention. 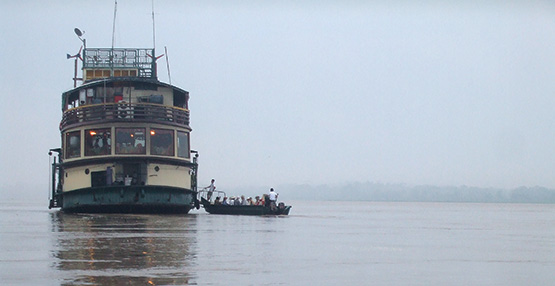 La Amatista (Spanish for amethyst) is an unpretentious small boat (14 cabins) modeled on the classical riverboat. Floor-to-ceiling windows in the dining room and an open-air observation deck allowed us to be ever in touch with the river and sense of remoteness of the environment.

A particular joy of a Whitman trip is the interaction with fellow graduates, renewing friendships and meeting new people, sharing a pleasure in lifelong learning, exploring new environments and finding out something about yourself in the journey. The riverboat allowed for both time alone and much interaction at meals, happy hours and out on the river. We quickly became a community of explorers sharing curiosity and adventure, stories, bug spray and lotions.

The day often started early with a 6:30 wake-up call, 7 a.m. breakfast as we all woke up, 7:30 convening at the skiffs. The skiffs took us out several times a day to early morning and evening bird and animal watching; night excursions looking for caimans, night birds and frogs; and shore visits. The skiffs enabled us to travel the small streams and byways for a closer look at the wildlife. Afternoons included “power” naps, reading, conversations, lectures and demonstrations by the crew. Early evenings included more conversations, reviews of the day by the guides, recounting of the species we had observed, tracking our voyage on large area maps and imbibing the local specialty, pisco sours. Several evenings a lively band by members of the crew delighted us. One afternoon we had a visit from a local medicine man who brought examples of leaves and herbs used in indigenous healing. 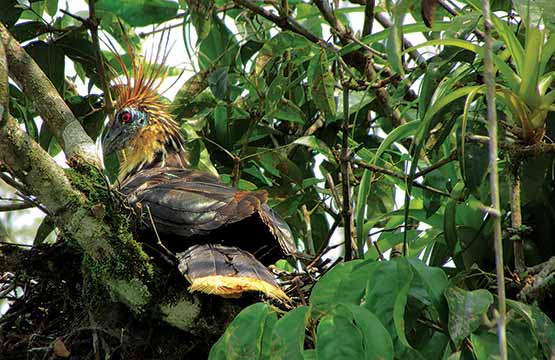 Although the Hoatzin is just one of numerous tropical birds in the Amazon basin, it is one of the most unusual and the only species in its family. Spotting native birds and animals was a definite highlight of the trip for the Whitman travelers.

On our fourth day, we came ashore and visited a village of about 100, Nueva York, and the school there. We carried with us basic school supplies and presented them to the children. There was an exchange of songs and a welcome from the village leaders.

Another pleasure of a Whitman trip is the formal and informal interaction with a faculty member. Professor Hutchison was available for informal discussions about evolution, early explorers, plants and animals, and more. We had two formal presentations: one on recently discovered wonders of developmental biology and another on the early naturalists, Alfred Wallace and Henry Bates, who explored the Amazon for more than a decade in the mid-19th century. Wallace independently developed a theory of evolution via natural selection and spurred Darwin to publish his work. 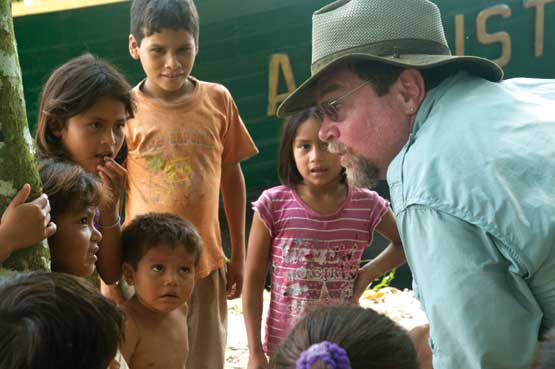 Professor Delbert Hutchison talks to children during a visit to the school at Nueva York. The group presented school supplies to the children.

I came away from this voyage with a sense of community, a great adventure, an appreciation for the power and strength of this river and its diversity of life, and eager to do it again! 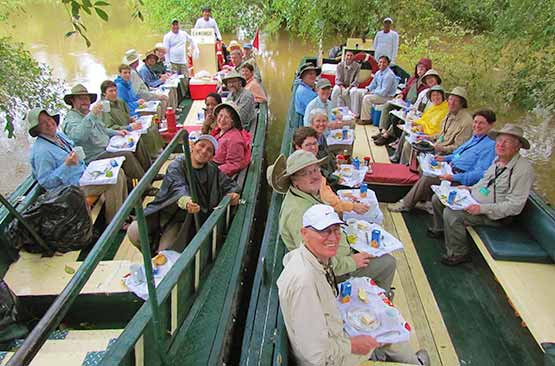 Editor's note: Linda King Brewer ’66 is past president of the Alumni Association Board and a member of the Whitman Board of Overseers. A practicing psychotherapist and adjunct professor at John F. Kennedy University, she lives in San Francisco.