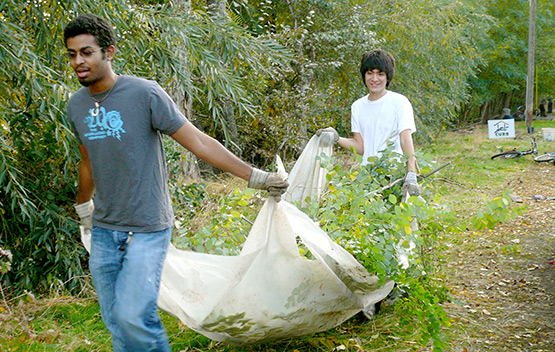 Philip Dickinson ’14 and Mitchell Fujimoto ’14 haul invasive plants and detritus away from the banks of Garrison Creek on Make a Difference Day.

On Make a Difference Day, volunteers engaged in seven projects. But community service is more than a one-day event for students.

It wasn’t an orientation week stunt when Meredith Kretzler ’14 and Lindsay Olson ’12 led eight first-year students knee-deep into Walla Walla’s Garrison Creek in August. The students were cleaning up the local creek, tearing out 300 feet of invasive blackberries and extricating everything from cans of food to a floating television from the water as part of a service program for incoming students.

As one of seven community service projects, Kretzler’s team planted native plants in the same area on Oct. 22.

“This is exciting because this final step in the restoration process is only possible due to the preparation work we did this summer cleaning up the creek,” Kretzler said. “I’ve now worked at this site on four separate occasions, and it is such a joy to see it substantially progress each time.”

The project was the result of continued collaboration between the Creating Urban Riparian Buffers program and the Whitman Community Service Program. Whitman students have partnered with CURB for more than 10 years, and have volunteered for the local organization on 22 occasions in 2011.

Although Make a Difference Day is designated as a single national service day, five out of the seven Whitman projects represented long-standing relationships between Whitman student groups and community partners. Students like Kretzler believe community service is more than a one-day event.

“Service is a way that I can involve myself beyond Whitman and in the Walla Walla community. It’s also a way to ground my academic studies,” Kretzler said. “I strive to apply all that I have learned from Whitman to better the world around me.”

A diverse group of campus organizations participated in community-building projects in October: the Phi Beta Kappa fraternity partnered with the Downtown Foundation to clean up downtown Walla Walla; the Whitman Christian Fellowship worked on a sustainable garden in conjunction with the Washington Native Plant Society and Blue Mountain Humane Society; and the Tau Kappa Epsilon fraternity volunteered with Habitat for Humanity. Two other groups of Whitman students and their families worked on stream restoration projects with the Whitman Mission and Kooskooskie Commons. 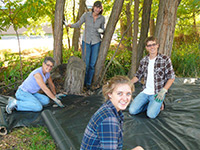 Meredith Kretzler ’14, center, helps to lay a layer of black plastic over an area along Garrison Creek to create a riparian buffer.

“This isn’t a one-time thing. A lot of these groups have consistently worked with these organizations and used this community service day as another opportunity to get involved,” said Kelsie Butts ’11, Whitman’s community service coordinator.

Whitman students have been participating in Make a Difference Day since 2007, with more than 100 students volunteering each year since 2009. The popular program is important to the surrounding area, because community partners depend on the volunteer efforts of Whitman students.

“Whitman students, faculty and staff are the driving force behind the CURB program,” said Tara Patten, CURB coordinator. “They contribute hundreds of volunteer hours and thousands of dollars in in-kind match to CURB and other Steelheaders’ projects. With their help, the CURB partnership (Tri-State Steelheaders, Kooskooskie Commons and Walla Walla County Conservation District) has installed 30 urban riparian buffers along Walla Walla’s creeks.”

This year, both parents and students had an opportunity to reflect and relax at the end of their service experience in the Coffeehouse – the basement of Reid Campus Center.

“Whitman students are incredible for doing a lot of different kinds of activities,” said Noah Leavitt, assistant dean for student engagement, who worked to add the reflection time this year. “We’re always thinking about how that student can create meaning and how the experiences can offer them other opportunities or insight.”

While students who had volunteered on housing projects gathered to eat cupcakes after polishing floors and painting at the Kirkman House, another group of stream restoration volunteers showed off their torn pant legs, the hems stuck with thorns from the invasive plants growing wild along Walla Walla’s Yellowhawk Creek.

“We had to work hard to get rid of [those plants], but it was very satisfying,” said Kathy Best, mother of Anna “Richael” Best ’13, who lives in the Community Service interest house. “There was definitely a visible difference. One person would have done nothing, but there were 12 of us.”