Orchestra to Perform for Music Educators 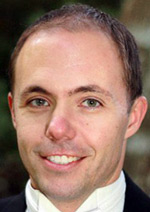 Jeremy Mims is in perpetual motion. It’s a necessary character trait for the visiting assistant professor of music, who must be able to multitask in order to conduct the Whitman Orchestra and the Chorale and Chamber Singers, as well as teach conducting.

At Whitman, I “get to make music all the time,” Mims said between rehearsals.

Mims is especially proud these days, because the Whitman Orchestra was chosen to perform at the Washington Music Educators Association’s conference. The concert will take place at the Yakima Convention Center at 8 p.m. on Feb. 17.

“It’s a great honor for our group to perform in front of the association,” Mims said.

The selection came about after Mims sent concert recordings to the association. The recordings impressed the group, as Whitman’s was the only college orchestra from Washington invited to perform.

“It’s great stress, for me and the students, because the audience from the association is more learned, has more attuned ears, and understands more about music than a normal audience.”

The Whitman Orchestra will perform portions of compositions from a variety of time periods and styles. The program will include Vivaldi’s “Concerto for Four Violins, Op. 3, RV 549”; Ottorino Respighi’s “Suite Per Archi”; and Stravinski’s “Apollo Suite.” The orchestra will close with the difficult “Scherzo” by Prévost.

“I chose lesser-known pieces in order to introduce the audience to different musical literature,” he said.

To prepare for the performance in front of the association, which Mims said will serve as a powerful recruiting tool, the Whitman Orchestra will give a selection of concerts in Portland.