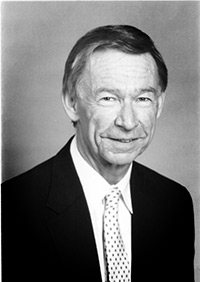 The legacy of Prof. David Deal (1939-2001) is everywhere at Whitman, especially if you know where to look. A scholar of modern Chinese history, he was instrumental in establishing the Asian studies program and founded the Whitman in China program, which celebrates its 30th anniversary this year. During his 32-year tenure at Whitman, he served as a division chair, as dean of the faculty and as a beloved mentor to generations of students.

One of those students was Chas McKhann ’79, now a professor of anthropology who has followed in Deal’s footsteps to become Whitman’s director of Asian studies. He said the new lecture series, which will bring experts in a wide range of interdisciplinary Asian studies fields to Whitman, is a fitting tribute to Deal.

“David was the real founder of Asian studies at Whitman,” he said. “In the early days, he taught early and modern Chinese, Japanese and Indian history – six separate classes, a huge stretch by contemporary standards. Later, as dean of the faculty, he worked behind the scenes to promote hires in Asian studies positions in a variety of departments – language and literature, religion, politics and anthropology. Whatever we have in the way of Asian studies is mostly David’s legacy.”

Deal joined the Whitman faculty in 1969. A Wenatchee native, he earned his bachelor’s degree at Whitworth College and his Ph.D. in history at the University of Washington. In addition to studying in India and Japan, he served as a visiting scholar at Stanford and a research associate at Harvard. He was dean of the faculty at Whitman from 1989 to 1996 and oversaw the Whitman in China program for nearly two decades.

“The David Deal Lecture in Asian Studies is the consummate way to honor someone who contributed to Whitman College as a teacher, scholar and administrator,” said Timothy Kaufman-Osborn, provost and dean of the faculty. “David is sorely missed by those who knew him, and this lecture series provides an enduring testament to his legacy as well as our ongoing indebtedness to him.”

The first lecture in this series, which took place on campus in late October, featured Harvard professor emeritus and world-renowned political scientist Ezra Vogel. His talk, titled “Deng Xiaoping: The Man Who Changed China,” was followed by a book signing.

Dott and other Asian studies faculty members conceived the lecture series last spring as a way to honor Deal and promote the Asian studies program he helped build.

The lecture series joins many other Whitman institutions as a testament to Deal’s legacy. McKhann said his experience as one of the first Whitman graduates to embark on the Whitman in China program with Deal at the close of the Cultural Revolution inspired him in his career.

“I just fell in love with what I saw.”

A Black Hat for Ezra Vogel 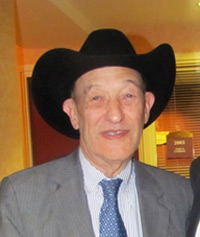 Ezra Vogel was given a black cowboy hat by Ashley Esarey, visiting assistant professor of politics. In October, Vogel gave the inaugural lecture of the David Deal Lecture in Asian Studies, titled “Deng Xiaoping, the Man Who Changed China.”

The hat signified Vogel’s journey to the West, but also was a reference to the subject of his talk, Deng Xiaoping (bottom left), who received a similar hat in a famous visit to Texas in 1979. Ezra Vogel has dedicated his life to studying China and Japan. As Henry Ford II Research Professor of the Social Sciences Emeritus at Harvard University, he spent nearly 40 years instructing students about communist Chinese society, Japanese society and industrial East Asia. 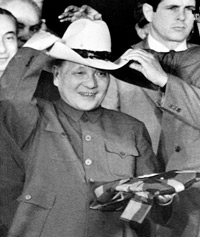 After teaching at Yale University in the early 1960s, he became a tenured professor at Harvard in 1968 and later served a two-year stint with the government as National Intelligence Officer for East Asia. He also served as the director of the Fairbank Center for East Asian Research at Harvard and as the first director of Harvard’s Asia Center. Vogel’s lecture at Whitman examined the political legacy of reformer Deng Xiaoping, the man who succeeded Mao Zedong and led China to embrace capitalism, transforming the country into a global economic superpower. Vogel recently released a new book on the same subject, “Deng Xiaoping and the Transformation of China.