In Search of Dinosaurs 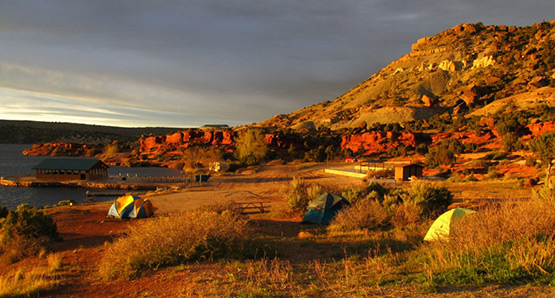 At Cottonwood Campground on the edge of Alcova Lake, the sunset intensified the blood-red color of the Chugwater Formation. A public Dinosaur Trail nearby was a good introduction to the age and formation environment of the rocks making up the cliffs.

A group of Whitman students went into the wilds of Wyoming to unearth the prehistoric past. They discovered triceratops fossils and raptor bones – not to mention the ubiquitous wind.

They encountered more than two billion years of the Earth’s history. And that was in the first 24 hours after the expedition reached central Wyoming. The goal of the Whitman geology and paleontology students’ epic excursion: to hunt dinosaur fossils. 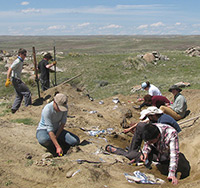 At rear left, Simon Pendleton ’11 and Brad West ’12 begin to build a fence to protect the dinosaur excavation in the Lance Formation. In the foreground, students and Prof. Nick Bader excavate fossils from a creek channel that is 66 million years old. At Tate Geological Museum in Casper, Wyo., students wrapped fossils in aluminum foil to protect them prior to encasing them in plaster for removal.

The men Nicolaysen mentioned were participants in what she calls the “arms race of fossil collection” – digs in the late 19th and early 20th centuries that made Wyoming the epicenter for dinosaur fossils.

History is abundant beneath the badlands of central Wyoming, especially the Lance Formation, a thick-bedded, buff-colored sandstone outcrop well known to geologists and paleontologists. This rock group, deposited roughly 66 million years ago and located near Casper, Wyo., practically bubbles up with Triceratops and Tyrannosaurus Rex fossils.

“Clearly the most extraordinary part of the trip was walking through the hills of the Lance Formation,” said Anna Sky ’11, remembering the discovery of her first 60-million-year-old dinosaur fossil. “I saw my first fossil. Then my second nearby. I realized that this area is so rich in fossils that I could be nonchalant and choosey about the fossils I wanted to sample.”

Sky remains awed by the time spent roaming the Lance Formation and the stories the rocks revealed. There are so many fossils located here that she and her fellow students were nearly tripping over them.

“I became more excited by the 20th fossil than the first,” Sky said. “The more you know, the greater the history that is unraveled in each specimen, which enriches the experience.” 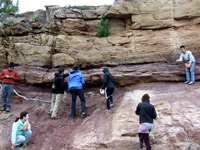 Students standing on Precambrian granite look at an ancient soil (purple-hued layers) that formed prior to the evolution of terrestrial plants and animals. The overlying sandstone is at least two billion years younger than the granite. From left to right are Brad West ’12, Jenni Doering ’14, Prof. Nick Bader, Nick Chow ’13, Gemma Wallace ’14, Anna Sky ’11 and Khoa Nguyen ’12.

Along with Nicolaysen, the trip (May 25 to June 4) would not have happened if not for the participation of Whitman professors Pat Spencer and Nicholas Bader.

While these professors viewed the trip as a way to supplement classroom education, the Whitman College experience involves more than academics. The students were taken out of the field and into Trails Museum in Casper to sample the history of the American Indians and the convergence of four trails – the California, Oregon, Mormon and Pony Express – along the length of Wyoming. Plus, the students had a first-hand look at Wyoming ranch life by visiting a sheep-shearing barn.

“This trip to me is what the liberal arts experience is all about,” said Jennifer Doering ’14. “A student’s interest in a particular discipline is augmented, enriched, because it’s placed within the context of a greater, holistic style of learning.”

Experiential learning – even transporting students into the muck of a rocky outcrop – serves the learning outcomes of disciplines such as geology and it serves to forge friendships. The close quarters of the 11-passenger van can create an edge. But the hours and days these classmates spent on the road webbed together lasting bonds among the students and professors.

I personally lived the dream of every 6-year-old. I dug up dinosaur bones.
— Bridget Tescher ’14

“Working on the paleontological digs was definitely the most exciting aspect of the trip for me,” said Gemma Wallace ’14, a biology major interested in evolution and development. “But being on a van together for almost 30 hours, sleeping in tents at night when the temperature could drop to the 30s and trying to keep warm in the nearly constantly-blowing wind are things that brought our group together. I had the opportunity to really get to know my peers and professors.”

The adventurous group was fortunate to work with Kent Sundell, department chair and full-time professor at Casper College, as well as curators from the Tate Geological Museum. Nicolaysen, who helped organize the collaboration with Sundell, said the fossils the Whitman geology group unearthed were donated to the museum and have since been documented to be parts of a Triceratops, a hadrosaur, a theropod – a raptor Dromaeosaurus – and river turtles. 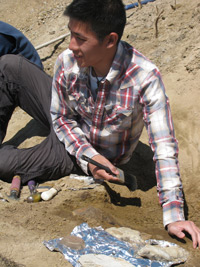 White fossils on the foil have been exposed to the surface longer than the sought-after dark brown fossil below the hand and brush of Khoa Nguyen ’12.

“My first recollection of the trip was wind,” said Bridget Tescher ’14. “The 35 mile-per-hour winds threatened to knock down my tent. But more important was that I personally lived the dream of every 6-year-old. I dug up dinosaur bones.”

The dinosaur excursion could not have taken place, Nicolaysen said, without generous support from the Outdoor Education and Leadership Fund, the geology department field trips fund and Whitman’s Innovation in Teaching and Learning Grant.

For Nicolaysen, though, the expedition back to her native Wyoming was about more than digging up fossils and broadening the students’ scope of learning. It satisfied her to share the geologic tales first told to her by Dana Van Burgh, a nationally-recognized earth science teacher.

“Our exploration of Wyoming revealed stories in the rocks that I played on as a child. What fun it was to see these same familiar places through the eyes of Whitties."