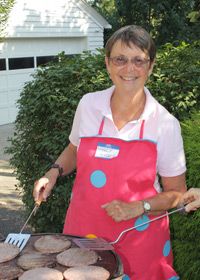 Nancy Sanford Hughes ’64 cooks hamburgers on her stove, called an Ecocina. The stove is economical to build and saves up to 60 percent of the wood used by a traditional fire, while also reducing smoke by over 70 percent. 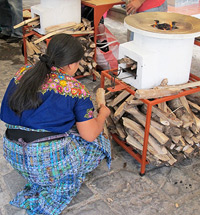 A woman puts wood into an Ecocina in San Miguel de Allende, Mexico.

Though Nancy Sanford Hughes ’64 and Sarah Cronk ’15 have never met and are separated by 51 graduation years, they have something in common other than their college choice – something amazing.

Within three months of one another, each has received a $100,000 grant for the nonprofit organizations they founded.

Hughes, the 2011 Alumna of Merit, was selected Nov. 3, 2011, to receive a Purpose Prize® Award, which recognizes “extraordinary contributions in encore careers.” It is the only national program that targets individuals age 60 and over.

Hughes’ nonprofit, StoveTeam International, helps save people in the developing world from catastrophic injury – even death – by replacing the traditional open cooking fire with an efficient stove. In the past three and a half years alone, StoveTeam has helped establish six factories in El Salvador, Guatemala, Honduras, Mexico and Nicaragua. Hughes and StoveTeam are currently researching new stove-making options for Haiti and the Amazon Basin and plan to open more factories in Africa and Mexico in the coming year.

Upon learning she was selected for the award, Hughes, of Eugene, Ore., said, “I feel humbled. I did not choose to do this work – it chose me. The recognition is great, it will enable us to leverage StoveTeam’s expansion and reach even more children and families.”

“My Whitman liberal arts education gave me the tools to find the opportunities in challenges and use them to the best advantage.”
— Nancy Sanford Hughes ’64

She also credits her alma mater. “My Whitman liberal arts education gave me the tools to find the opportunities in challenges and use them to the best advantage,” she said. “I was a literature major, but I took classes in geology that made me think about the Earth, and my sociology courses helped me understand more about different people, cultures and societies.”

The award presented to Cronk on Aug. 18, 2011, also recognizes outstanding contributions, but specifically by members of the younger generation. She earned a “Do Something Award” from Do Something, a program that honors young people’s commitment to social change. On a VH1 awards show, actress Jane Lynch from the hit show “Glee” announced that Cronk had won the $100,000 award.

Before a nationally televised audience, Cronk explained that her nonprofit works with 49 inclusive teams in 20 states and South Africa.

“Our goal is to start 100 squads, and the prize money will allow us to outfit and train all those squads,” Cronk said.