The following speakers represent only a small selection of the broad range of nationally acclaimed artists, authors and lecturers who visited campus and interacted with Whitman students this fall.

Juan Meléndez, a public speaker and human rights activist who was wrongly convicted of murder and sentenced to death, shared his moving story and views on the death penalty during his October visit. Meléndez spent nearly 18 years on death row in Florida after being convicted in 1984 of a crime he did not commit. He is the 99th death row inmate in the U.S. to be exonerated and released since the reinstatement of capital punishment in 1973. Speaking before an overflowing crowd in Olin Hall, Meléndez recalled his ordeal with brutal candor and, at times, humor, urging audience members to educate themselves about the injustices of capital punishment. The event was a joint effort between Whitman and Walla Walla Community College faculty. Meléndez also made a visit to the sociology class of Laura and Carl Peterson Endowed Chair of Social Sciences Keith Farrington. 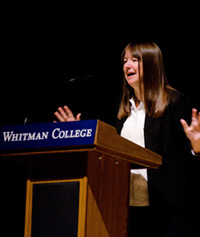 Anne Fadiman, acclaimed author of the Whitman 2011 Summer Read Program book selection “The Spirit Catches You and You Fall Down,” captivated a crowded Cordiner Hall audience during her October visit to campus. Her 1997 book chronicles the struggle of a Hmong refugee family with an epileptic daughter and their interactions with the health-care system in Merced, Calif. First-year students read and discussed the book as part of Orientation activities, and the campus and Walla Walla communities were invited to take part. Fadiman’s work also has appeared in Harper’s, The New Yorker and The New York Times, and her book was the recipient of a National Book Critics Circle Award, an L.A. Times Book Prize and a Salon Book Award. She was introduced by Zoe Erb ’14, a Student Academic Adviser in Jewett Hall. Chris Leise, assistant professor of English, moderated the presentation. 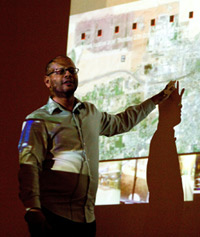 Hasan Elahi is a cutting-edge multimedia artist and associate professor at the University of Maryland. He brought his unique creative and political perspective to Whitman in October with the lecture “Hiding in Plain Sight.” Elahi, a frequent flier, was detained at a Detroit airport and questioned by the FBI in 2002 after his name mistakenly appeared on a terrorist watch list. To prove his innocence, he embarked on an audacious art project in which he documents every move he makes, wearing a GPS tracking device and photographing his surroundings to upload to his website. Operating at the intersection of art and technology, his work critiques surveillance culture. Elahi has spoken at the Tate Modern gallery, the Einstein Forum and the American Association of Artificial Intelligence.