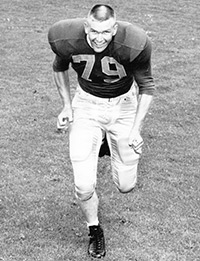 John Wilcox, a rookie defensive end for the Philadelphia Eagles during their 1960 NFL championship season, served as an assistant football coach at Whitman from 1967 through 1975. He was part of the coaching staff that guided Whitman to a share of the 1969 NWC championship.
Wilcox left the football staff a few years before Whitman discontinued its gridiron program in 1977, opting to concentrate on his role as head coach of the men’s basketball team.
He coached men’s basketball throughout the 1970s, and his teams averaged 14 wins a season from 1972 through 1975. His best season was 1975-76, when the Missionaries posted an 18-7 season record while missing an NWC title by just one game.
Wilcox turned his attention to women’s basketball during the 1980s, revitalizing that program before winning a conference title in 1987-88. In the eight seasons that followed, his teams advanced to post-season play five times. He twice earned conference coach-of-the-year honors. With 178 victories to his credit, Wilcox remains the all-time winningest coach in the history of Whitman women’s basketball.
Marcella Weissback Rietz ’95, a women’s basketball team captain, says Wilcox served as a father figure as well as a coach.
“He treated us like we were his daughters,” she said. “He put us first and always had our best interests in mind.”
Wilcox and his wife, Remy, who coached debate teams at Whitman for many years, continue to live in the rural Milton-Freewater area. Their two sons Michael Wilcox ’88 and Marcus Wilcox ’86 and daughter, Karen Carman, live in Walla Walla. 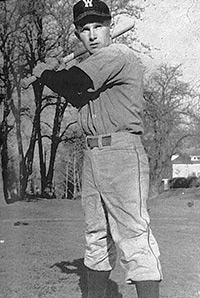 Del Klicker ’56 was one of the relatively few Whitman competitors who had the talent to earn All-Northwest Conference First-Team honors in two sports.
As a freshman second baseman in the spring of 1953, he sparked Whitman at the plate, leading the team in hitting with a .350 batting average and 22 runs scored.
Whitman’s 1954 baseball media guide noted that Klicker, as a freshman, had alternated between the lead-off and clean-up spots in the batting order, quickly establishing himself as one of the top performers for coach Joe Beidler.
Klicker hit .306 as a sophomore while leading the team with 14 stolen bases. He hit well over .300 again as a junior, opening the season with a home run against a team from the Walla Walla State Penitentiary. Klicker made the All-NWC First Team as a sophomore second baseman and as a shortstop during his junior and senior seasons.
Despite his relative lack of size as a 5-foot-6, 138-pound guard, Klicker played a major role on the Missionary basketball teams in his last two years at Whitman. He was voted to the All-NWC First Team as a senior.
Klicker led Whitman to a victory over Linfield in February 1955, prompting the school newspaper to report that he had “played much better than Linfield would have preferred as he stole the ball from the opposition’s hands, intercepted passes and took more than a 5-foot-6 guard’s share of rebounds off the boards.”
Klicker, who was raised in Walla Walla, returned home after two years in the Navy Reserve. He raised a family and involved himself in various Klicker family enterprises.
His brother, the late Dave Klicker ’58, was inducted into the Whitman Athletics Hall of Fame in 2009. 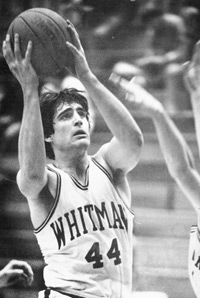 Dave Mastin ’88, a 6-foot-4 forward with the talent and versatility to play any position on the basketball floor, set a standard of excellence that few players have matched in the long history of the Northwest Conference.
Mastin is one of only seven players in the conference who earned All-NWC First-Team honors in each of his four seasons.
Following an all-state prep career at Walla Walla High School, Mastin turned down the chance to play NCAA Division I basketball to come to Whitman to play for coach Jim Mastin, his father.
Mastin averaged 14.4 points and 7.4 rebounds as a freshman while becoming the only non-senior voted by coaches to the All-NWC First Team.
As a sophomore, Mastin averaged 15.8 points and 11.0 rebounds per game. He led the conference and NAIA District I in rebounding. He posted more than a dozen double-doubles (10 or more points and rebounds in the same game).
As a junior, Mastin averaged 15.8 points and 9.0 rebounds. He capped that season with one of his most notable honors, earning a spot on the Little All-Northwest Team.
Despite abdominal surgery that hampered his final season, Mastin averaged 15 points and 9.9 rebounds, leading the conference in rebounding for a third straight year. He and teammate Brian Richard ’89 led the Missionaries to a share of the NWC title.
After Whitman, Mastin earned his law degree at Gonzaga University, practiced law and served multiple terms in the Washington State House of Representatives. He is now a financial consultant and lives with his family in Walla Walla. Mastin joins his father, who passed away in 2005, in the Whitman Athletics Hall of Fame. 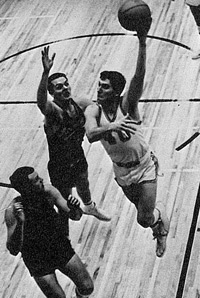 Few players in the history of Whitman College put the ball in the hoop more often than Bruce Bennett ’70.
The 6-foot-5 center needed only 471 points in his senior year to surpass the record of 2,019 points set in 1968 by Don Woodworth ’68, but Bennett’s education plans left no room for a senior season. He left after his junior year, transferring to New York’s Columbia University to pursue a cooperative 3-2 engineering program that still exists.
Playing basketball at Whitman was “a tremendous amount of fun,” he said, “but I was in college to get an education and begin a career.”
Bennett earned all-conference honorable mention honors in his first season (1966-67) while averaging 18.3 points and 11.1 rebounds. His 475 total points was a record for a Whitman freshman. He was named to the All-NWC First Team as a sophomore while averaging 20.2 points and 11.2 rebounds per game.
As a junior in 1968-69, Bennett topped the NWC in scoring at 22 points per game. He also made the All-NWC First Team again. He tallied 30 or more points five times as a junior, hitting a career-high 38 in one game. In December 1968, he combined 34 points with 18 rebounds in Whitman’s first-ever victory in its new Sherwood Center.
Bennett finished his three-year career with 1,549 points and 836 rebounds. Forty-one years later, he still ranks sixth in career scoring at Whitman based on his three seasons.
Bennett has lived in the Seattle area for the past two-plus decades, working as a structural engineer analyst for Boeing.
Dave Holden