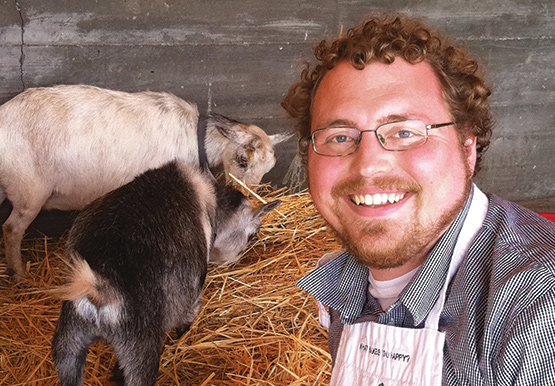 Michael Winnike ’07 pets one of the kids at a farm that supplies him with milk for his caramels. The free-range goats are fed a healthy diet of grass, clover, alfalfa, legume hay, water and salt. “Happy goats make great caramels,” Winnike said.

Goats. The furry ruminants likely are the last thought on your mind when you chew through a bag of caramels. But as entrepreneur foodie Michael Winnike ’07 savors every luscious taste of his inventive confection – Happy Goat Caramel – he credits the milk and butter produced by this cloven-hoofed mammal for making his candied product singular.

“My caramels are special because of goat milk’s richness of flavor,” Winnike said, his passion for candies ever-so conspicuous. “Goat milk has a naturally sweet, creamy flavor.”

He added, as if a vintner discussing his vineyard’s terroir, “Caramel is comfort food, but we wanted to create a really interesting and substantial flavor profile that has a beginning, middle and end – like a glass of wine. The flavor of goat milk contributes to the complexity of our caramel.”

The precise flavors Winnike savors come, in part, from medium-chain fatty acids, including caproic, caprylic and capric acid, which can be found in higher concentrations in goat milk than in cow milk. This gives his handmade caramels that certain “natural tanginess.”

In this case, the proof is in the caramel, rather than the pudding. In 2010, at the National Association for the Specialty Food Trade’s annual sofi awards – the Oscars of the $70 billion specialty food industry – Winnike’s confectionary creation was one of 10 products chosen for a Silver Award in the Outstanding New Product category, an impressive accomplishment considering there were 464 entries.

These awards, along with a stellar reputation, landed Happy Goat on TV with the Today Show, Good Morning America and ABC News airing stories on Winnike and his caramels.

Chocolate on the apartment walls

His parents had their doubts. When he started developing his caramel concept, Winnike worked for a San Francisco law firm. Naturally, his parents wondered why he was playing around with candy. Experimenting with candy, though, had become Winnike’s passion ever since he realized that making lunch for his colleagues was the best part of his day.

“I was cooking for the entire office. I enjoyed it, so I decided I wanted to pursue food more seriously.”

After trying his confectionary, his parents quickly came around. In fact, his mom owns part of the company and serves as acting chief operating officer.

Happy Goat is located in San Francisco. Because he works full time as a document negotiator for an asset management company, Winnike runs his boutique confection company in his spare time, on weekends and vacations, totaling about 16 hours per week. He said the years spent at Whitman gave him the self-assurance to step outside his comfort zone. 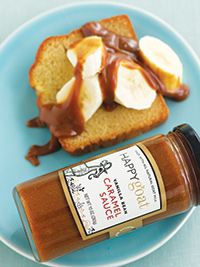 “There is no degree at Whitman to go into confectionary,” the former English major said. “But in the Whitman community, there is great support for trying to pursue your passion. You have the freedom to try different things, take classes you never thought you’d take. Whitman is a community where people set a premium on pursuing good ideas and chasing what makes you happy. These values let you think outside the box. That’s what it means to have a liberal arts education. It enables you to be adaptive.”

While there are few adventures more outside the box than goat-milk caramels, Winnike feels that as a Whitman student he gained the confidence that he could do anything, including making confections. He began by experimenting with truffles in his apartment in San Francisco’s Mission District. He tried all sorts of different recipes.

As he perfected his craft, he noticed his friends began craving his creations. Then, after months of getting “chocolate all over the walls of his apartment,” he figured it was time to get serious. He rented a commercial kitchen, where he dabbled with truffles, chocolate bars and caramel, and he began selling his treats to friends.

“I was learning about the business and building my skills.”

During this learning process, Winnike identified what made candy reach the high standards required by foodies: really good ingredients. He began looking for something to accentuate the flavor of his caramels while relegating sugar to a secondary role to reign in sweetness. The answer: goat milk.

“In the Whitman community, there is great support for trying to pursue your passion.”

“When I tasted goat milk I thought this could really set me apart. Nobody else was using goat milk in caramel. Not in premium confections. The flavor was fantastic because I was able to pull back on the sugar and let the dairy do the talking.”

Goat milk is the closest to mother’s milk. It’s easier on the stomach for those suffering from lactose intolerance. It has less fat than cow milk. Goats are environmentally friendly, have a small carbon footprint and produce less methane than cows. Everything about goat milk makes sense.

“We recognized that having no hormones or antibiotics, and assuring the goats were treated well, was consistent with making what we view as a high-end product,” Winnike said. “But sustainability wasn’t first on my mind when choosing to use goat milk. I was focused on making the best-tasting products.”

Because the goats supplying his milk – and butter – grow up healthy on a natural diet of grass, clover, alfalfa, legume hay, water and salt, the milk tastes better. The goats also are provided with shelter from the natural elements, and they are never separated from their mothers at birth.

Winnike doesn’t have a smattering of goats wandering around his apartment. He laughs that his landlord would never allow such a thing. He contracts with a wholesaler who provides milk from California farms where goats roam as free-range herds.

“Goat milk is always an alternative to others not only in terms of flavor, but also ethics.”

The entrepreneur supports a business ethic that enables his confections to rise above the competition. His caramels don’t tumble off an assembly line in a monster-sized factory. He produces them in small copper pots. Plus, he mixes his product in batches to ensure each pack of caramels has a distinct, natural taste.

Passionate for making candy, Winnike possesses more skills than just a sweet tooth and a finely tuned palate; he thrives on the intellectual side of running a business. It’s the critical thinking skills he learned at Whitman that he credits for helping him succeed.

“Whitman prepared me for many careers. In learning how to research and how to write, I developed the critical thinking skills necessary to learn about highly specialized subjects.”

Winnike remembers back to 2009 when he finally launched his Happy Goat brand. “My friends were excited. Suddenly there was a package and a website. People were like, ‘It actually happened.’”

Of course his friends were thrilled for him. They were rewarded with free treats. “There are fringe benefits to being my friend,” he said with a laugh. “Lots of candy. And candy makes everyone happy.”