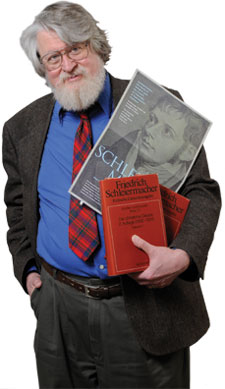 Walter “Walt” Wyman enjoys studying about the American Civil War (“I hope to visit more battlefields”), exploring movies with his wife, Sara (“Thank you, Netflix!”) and vacationing at the Oregon Coast.

The invitation to reflect upon the previous 10 years and to look ahead can in my case be responded to from three perspectives, depending on how “my discipline” is construed. From one perspective, my discipline is simply the academic study of religion. My named professorship suggests another perspective, namely biblical studies. My ongoing research and publishing interests point to a third angle of vision: theology.

From the perspective of the academic study of religion and the opportunities available to Whitman students, the past decade has seen a stunning transformation. Ten years ago there were only three faculty members in the department and three areas of study: Modern Western Religious Thought, Asian Religions, and Religion in America. It was obvious at the time that the religions of the Near East needed serious attention. With second-wave feminism evolving into third-wave feminism and the emergence of queer studies and gender studies, the question of the implications of these developments for the academic study of religion also was becoming pressing. Fortunately these concerns of the religion faculty coincided with the commitment of Whitman’s administration to internationalize and diversify the Whitman curriculum. The Department of Religion was expanded by two positions, one in near Eastern religions and one in gender studies and sociology of religion. Whitman students now can choose from a range of courses that simply were not available to them in 1999 – “Introduction to Islam,” “The Qur’an,” “Gender, Body and Religion,” “Queer Religiosities,” and “Religious Intolerance in the U.S.,” to name but a few. Not only has the Whitman curriculum been reshaped, but the addition of new faculty enabled the department to finally offer a religion major.

With the retirement of Roy Hoover, I was honored to be appointed as his successor to the Weyerhaeuser Professorship of Biblical Literature. Some developments in New Testament studies well under way in 1999 have continued vigorously. The emergence of a “third quest” for the historical Jesus has generated a flood of books that shows no sign of diminishing. Pauline studies have seen a perhaps unexpected renaissance; ever-increasing sensitivity to the Jewish context of Paul’s theology has resulted in less-Lutheran, more Jewish pictures of Paul. New discoveries still crop up in the field of early Christianity; the unearthing of the so-called “Gospel of Judas” adds yet another strand to the confusing tangle of early Christianities. On the popular culture front, the appearance of Dan Brown’s “The Da Vinci Code” in 2004 generated both public controversy and scholarly response. Many of these developments become subjects for discussion in my courses “The New Testament and Early Christianity” and “The Problem of the Historical Jesus.”

As for the discipline of theology, the last decade has seen the further development of a number of trends and issues that were already on the radar screen in 1999: feminist and queer theologies, post-colonial perspectives on theology, post-modernist theological reconstructions, to name three. The problem of “science and religion” continues to lead a bifurcated existence in American culture: sophisticated explorations of the theological implications of contemporary theories in physics, cosmology, and biological emergence among the experts, the simplistic debate between creation and evolution in popular culture. The issue of religious diversity and religious knowledge/truth is finally receiving the attention it deserves. The sudden emergence of the “New Atheism” (Richard Dawkins, Christopher Hitchens, Sam Harris, and others) has made vividly present again the debate about atheism that has been under way since the 19th century.

“From the perspective of the academic study of religion and the opportunities available to Whitman students, the past decade has seen a stunning transformation.”
– Walter Wyman

My own research area continues to be Friedrich Schleiermacher (1768-1834), the first major post-Enlightenment Protestant theologian. In so far as theology is perhaps the only discipline in the modern academy that can seriously be suspected of being a discipline without a subject matter, I find this 19th century thinker to be compelling for his rethinking of the methodological and epistemological problems of the field. German scholars are diligently producing a critical edition of his works, and I am struggling to master the relevant source material for a book tentatively titled “Schleiermacher’s Neo-Protestant Dogmatics.”

And what of the next 10 years? I see no signs that post-modern, post-colonial, and gendered perspectives have exhausted their vitality, and expect them to continue to inform and challenge both theology and religious studies. I expect the discussion of the theological issues mentioned above to continue. As for the future of the academic study of religion at Whitman, given present constraints I do not foresee any major developments. But if I had unlimited funds I would like to see a position in global Christianity.

The Weyerhaeuser Professorship of Biblical Literature was founded in 1921 by the seven children of Frederick and Elizabeth Sarah Weyerhaeuser as a memorial to their parents.