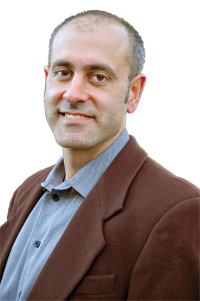 “Most of what I do off campus involves parenting my two kids, Anna, 12½, and Niko, 9. I also play mandolin and sing in a local acoustic band, and occasionally act on stage along with my daughter.”

In 2000, critical political theory was in a state of disarray (in which it arguably remains). Debates between Michel Foucault and Jürgen Habermas and their adherents in the 1980s and ’90s, about whether to base a critical theory of society on aspirations to consensus through communication or on a network of perpetually negotiated power-relations that could not be transcended, had run their course and become rather stale. Queer theory was one locus of vital intellectual generativity (highly influenced by Foucault and Judith Butler); while at the same time the philosophical effort to establish standards of “deliberative democracy” was all the rage among “normative” political theorists (more influenced by Habermas and John Rawls) – but these circles were not much in communication with each other and tended to disdain each other.

At the end of 1999, what do you remember thinking, hoping, would happen in your field in the years to come?

I hoped that the startlingly new political coalitions that had come together on the streets of Seattle during the 1999 WTO demonstrations – especially between workers in the labor movement, students, and environmentalists (remember “Teamsters & Turtles”?) – would instigate a new round of reflections among critical political and cultural theorists about how political “subjects” with a global, coalitional, democratic consciousness could emerge just as a historically unprecedented, global form of capitalism (and transnational governing institutions like the WTO) had come into being. And in fact, with the debates catalyzed by the trilogy of important books by post-Marxist theorists Michael Hardt and Antonio Negri (the first being “Empire” in 2000), this has begun to happen, although these books themselves fell far short of conceptualizing what a global, radical-democratic politics would look like in specific terms. At the same time, some new important trends in political theory, especially the surge of interest in political aesthetics informed by the French philosopher Gilles Deleuze, in my view, have unfortunately redirected theorists away from the task of critically analyzing social institutions and movements in concrete terms. We need to get back to Antonio Gramsci!

“Our irreverent band of engaged teacher-scholars, who share deep respect for one another’s endeavors and profound commitments to our students, our research, and our responsibilities as professors to society at large, is exceptionally rare – quite likely one of a kind. ”
– Paul Apostolidis

The term “breakthrough” suggests a model of scientific inquiry that doesn’t describe well how intellectual life develops in new ways in the study of politics – at least, not in the way Whitman faculty as a group conceive of this endeavor! I’d prefer to speak in terms of promising new lines of analysis and provocative, novel types of questions about political life – questions like these: What do democracy and citizenship mean in an age of economic, political, and cultural globalization? What new forms of class, racial, and gender domination are emerging in this more global society, along – one hopes – with new possibilities for contesting these power-dynamics? What are the ideological and structural prerequisites of current practices of imperialism? How can governments, nongovernmental organizations, and popular coalitions draw on the lessons of past policies and social movements to address the mounting problems associated with global climate change?

Your dream department or research project?

My dream department, in all seriousness, would be the Whitman College Department of Politics. I have learned enough about departments of politics (or government, or political science) at other colleges and universities to know that our irreverent band of engaged teacher-scholars, who share deep respect for one another’s endeavors and profound commitments to our students, our research, and our responsibilities as professors to society at large, is exceptionally rare – quite likely one of a kind.

My dream research project, which would require truly massive resources, would be a multicountry interview-based study of the “precariat,” the emerging mass (cross-class) formation of people in socially precarious jobs and living situations, including immigrant day laborers, students, and native-born blue collar workers formerly protected by social welfare programs.

My dream teaching opportunity would be to cultivate a community-based research endeavor for Whitman students based on our ongoing program on “The State of the State for Washington Latinos” but involving a multicampus network of undergraduate researchers, professors, and community partner organizations located in various places throughout the state.

The Judge and Mrs. Timothy A. Paul Chair of Political Science was established in 2004 by George N. Paul ’35 with a bequest in memory of his parents. Timothy A. Paul was a Superior Court Judge in Walla Walla County during the 1930s and 1940s.