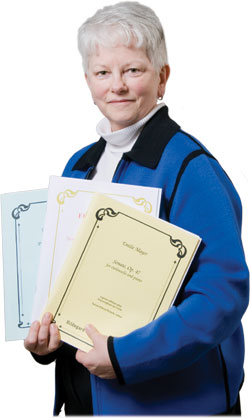 Susan Pickett says, “In my spare time, I am a baseball fanatic.”

Twenty years ago when I began my research about women composers, the field was in its infancy. Since then, the quality and quantity of research has exploded. I was fortunate, in one way, to be one of the earliest researchers because so much of what I discovered and published was pathbreaking.

On the other hand, I had precious little previous research by others to help pave my way. In such a circumstance, having the financial resources available through my endowed chair, allowing me to travel to archives, was absolutely necessary. Having the freedom to photocopy tens of thousands of pages of 18th and 19th century music by women composers was essential. As I found music that was penned or published more than 100 years ago, it was too often literally crumbling; had I not been able to make copies of it before it self-destructed, those precious resources could have disappeared – literally.

During the initial decade of my research I naively thought that publishing my first handful of 19th century masterpieces by women composers would change the way music by women composers was viewed by the “old guard.” I now know that getting traditional music history book publishers to even include the names of some of these amazing composers is going to take more time, effort, and political pressure.

“Watching my students react in amazement when hearing “new” music that they admire, then getting irate as they hear about the obstacles the women encountered, has kept my own enthusiasm bubbling.”
– Susan Pickett

It is happening, but ever so slowly. That frustration is mitigated when I teach my class about women composers, which has been one of the most rewarding results of my research. Watching my students react in amazement when hearing “new” music that they admire, then getting irate as they hear about the obstacles the women encountered, has kept my own enthusiasm bubbling. I also have had the pleasure of working with several students on editions of music that were subsequently published. Seeing their expressions as they proudly hold a publication that bears their name as editor or having them go on to graduate school to put their own mark on the field is so rewarding.

I think my “dream music department” of 2020 would allow me to interact even more one-on-one with students on the very time-consuming work of creating modern editions from the manuscripts I already have collected. On the other hand, the generosity of Whitman College in general, and my endowed chair in particular, have already created the circumstances that allow me to give some long-deceased women composers the accolades they so richly deserve, and the college also has blessed me with intelligent and open-minded students with whom I gladly share my passion.