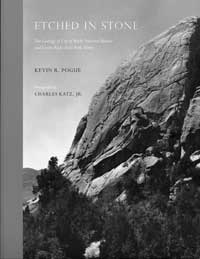 As a Whitman geology professor and avid climber, Kevin Pogue’s enthusiasm for the City of Rocks in Idaho is evident both in and out of the classroom. His new book, “Etched in Stone: The Geology of City of Rocks National Reserve and Castle Rocks State Park, Idaho,” is the first of its kind to explore the geology of the area in a format that is both accessible and appealing to visitors, park naturalists and geologists alike.

Published this year by the Idaho Geological Survey, the book provides a detailed overview of the geological evolution and history of the City of Rocks National Reserve and the adjacent Castle Rock State Park, as well as a glossary of terms and photographs of geologic structures.

“The idea behind the book was not only to make something that summarized and explained the geology scientifically, but was also approachable for the layperson,” said Pogue.

The book, a culmination of six years of research, is the only academic resource available that provides a comprehensive, intelligible study of the park’s geological development, he said. “One of my driving inspirations for this book was that once the City of Rocks became part of the National Park Service, all the interpretive resources were geared toward the historical California trail (for California-bound emigrants),” said Pogue. “There was nothing about the rocks and how they formed and what made this unique landscape. What I wanted to do was put (these resources) in a form the park naturalist could work with and be able to understand.”

The book’s accessibility may stem from the fact that both professors and students collaborated on the project.

“I had about nine different student senior theses that I supervised in the City of Rocks and those theses helped confirm the various types of geologic processes that were operating in the park and how they affected the evolution of the landscape there,” said Pogue.

“The best part about doing the book was wandering around in this incredible landscape, gathering the data and making discoveries with students who were excited about being out there in the field,” said Pogue.