It’s magical enough just seeing the Columbia River while driving on Highway 12 toward the Tri-Cities. 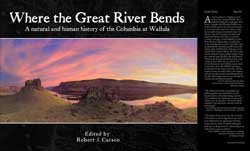 But then, as the driver glances left, thinking she’ll see only broad waters, she sees much more — 800-foot and 1,000-foot-high basalt cliffs and the yawning opening between these rock “gates” where the Columbia and Snake rivers flow through. This is Wallula Gap, an overwhelming sight on such a scale that a comparatively small motorist in her ant of a car is instantly reminded of just how majestic is the world.

Bob Carson, professor of geology and environmental studies, and admirer of the region designated a federal National Natural Landmark, calls the gap a “treasure.” Carson, editor and chief author, with several other contributing authors and photographers, has created a new book, “Where the Great River Bends … A natural and human history of the Columbia at Wallula.”

Wallula Gap, which Carson describes as “an oasis in the desert, a microcosm of Pacific Northwest natural and human history,” is one of 17 National Natural Landmarks in Washington State.

Carson said the federal landmarks are considered “the best” examples of particular geological or ecological phenomena. 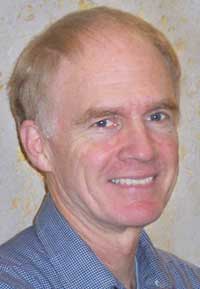 And Wallula Gap is the place where the world’s largest floods slowed as water from Glacial Lake Missoula rushed toward the Pacific Ocean 15,000 to 13,000 years ago. The floods bottle-necked there, causing muddy water and icebergs to spread from Walla Walla to Yakima. The water, 900 feet deep, poured through the gap at perhaps 60 miles per hour. During this period, as many as 100 floods occurred in the area, each lasting three to five days.

Carson said the book covers the gap’s geology and biology as well as past and recent human experience there, including American Indian history and the Lewis and Clark expedition, which camped at the gap.

Carson hopes the book will help readers make informed decisions about potential threats to the site — including issues such as public use of public land, energy, water and wildlife, dams and dredging.