Up on the roof 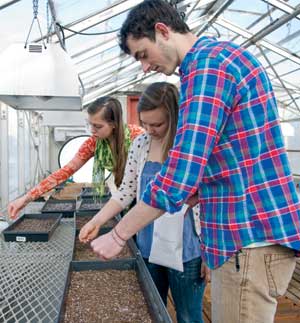 Nat Clarke ’11, right, begins planting the first seeds for the Model Farm in the biology greenhouse on top of the Hall of Science. Natalie Jamerson ’13, left, and Zoe Pehrson ’13, center, maintain the farm as part of their environmental studies internships.

When Nat Clarke ’11 first saw Whitman’s “lush green lawns,” he saw both opportunity and necessity. He realized how much energy and effort was being invested in their maintenance, and began to ponder whether “there were better ways of utilizing this space.”

Seeking to answer his own question, Clarke undertook an ambitious edible-landscaping project during his sophomore year, planting 90 asparagus crowns – from which he hopes to reap 25 pounds this spring – as well as rhubarb, chokecherry bushes, currants, perennial edible flowers and blueberries.

The second stage of this project has set its sights even higher – the rooftops, in fact. This fall, Clarke and other members of the emerging Student Agriculture at Whitman group (SAW) spearheaded an effort to establish a model farm on the Hall of Science’s rooftop greenhouse. The plan: to grow salad greens that can be sold to the campus food service, Bon Appétit, to help increase the volume of local produce in the dining halls.

Their aspirations have become a reality: The Model Farm was one of the first projects to receive funding from the Sustainability Revolving Loan Fund (SRLF). The fund is a $50,000 line of credit from which the college can allocate funds for projects that “significantly benefit Whitman’s sustainability efforts by conserving resources and improving efficiency.” 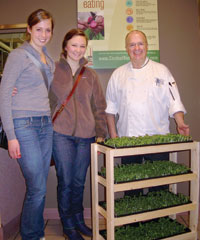 Jamerson, left, and Pehrson deliver the first crop of lettuce to Bon Appétit Chef Christian G. Chemin, right, just nine days after the microgreens were planted. Chemin, an organic farmer, served as an adviser to the students. He described the flavor of the organic greens they produced as “fantastic.”

The Model Farm Project was awarded $600 by the SRLF for the creation, maintenance and development of growing systems; an additional $200 in expenses was offset by Associated Students of Whitman College (ASWC) and Campus Greens funds.

In February, growing trays were set up in the allocated 160 square feet of the biology department’s 400-square-foot rooftop greenhouse. Clarke is excited about the possibilities that such a controlled environment offers.

“Because the temperature and light are maintained consistently throughout the winter, you can grow a harvest in three weeks, and then through a rotation, you can have a harvest every single week,” he said.

The rapid rate of return is only possible with young microgreens – sprouts such as mustard and sunflower greens that are used to garnish salads. Though a microgreen is just 3 to 4 inches tall at the time of harvest, it is a particularly coveted salad bar item, and Bon Appétit pays $18 for each 11-by-12-inch tray. The student farmers delivered their first trays in mid-February and plan to sell 12 trays in each rotation.

The group is excited that the loan will be repaid so quickly, because it will allow for profit to be set aside for the future development of the project. With these funds, SAW hopes to establish a paid position to oversee the Model Farm and SAW, and to eventually move the farm out of the greenhouse onto Whitman-owned farmland.

“How many schools would let you rip up the lawn to plant asparagus, or grow lettuce on top of the science building?”
– Nat Clarke ’11

Ultimately, Clarke hopes the project can help Bon Appétit raise the percentage of local produce they offer from 8 percent to 20 percent.

“Our Model Farm Project not only will help Bon Appétit reach that goal but also demonstrate to the college that the students are interested in and passionate about local produce and the environmental benefits of locally grown food,” said Natalie Jamerson ’13, who maintains the Model Farm with Zoe Pehrson ’13 as part of an environmental studies internship.

“I think it is amazing that Whitman is even letting us do this,” Clarke said. “How many schools would let you rip up the lawn to plant asparagus, or grow lettuce on top of the science building?”

The Sustainability Revolving Loan Fund was the brainchild of Ari van Schilfgaarde ’07. Although this is the second year applications have been accepted, it is the first year projects have been funded. Each project must generate enough savings to pay back the loan within five years. In this way, it embodies the true ideal of sustainability, said Lisa Curtis ’10, Whitman’s sustainability coordinator. “The word ‘sustainability’ gets tossed around a lot, but I think that the SRLF embodies true sustainability, both in the environmental and the economic sense,” she said.

More information is online at the SRLF Web site.