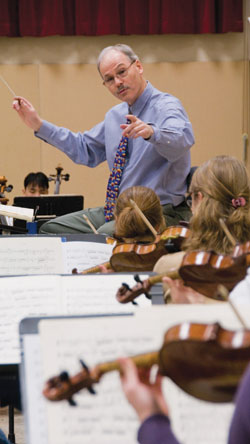 He’s starting to feel some arthritis in his left hand, some pain.

And so Ed Dixon, associate professor of music and director of the Whitman College Symphony Orchestra, has decided that this will be his last semester teaching at Whitman.

“While I still have time and have the opportunities, I want to dig into the cello and see what I still have left,” said Dixon, who joined the faculty two decades ago.

Years before that, he was an up-and-coming cellist while in junior high in Long Beach, Calif., already playing with adult musicians and professional Hollywood studio musicians in various orchestras. And then in college he was playing on sound tracks of television shows, such as “Columbo,” and director John Cassavetes’ movie “Woman under the Influence.” And for years after that, there were countless gigs and performances – including his 1987 debut at Carnegie Hall – and performances throughout the United States and Europe.

“I figure I have a least 10 good years left of really my best playing,” said Dixon, whose father was a professional trombonist in Artie Shaw’s band and whose uncle was a clarinetist for Tommy Dorsey.

But it won’t be easy to leave. There are his colleagues, “very outstanding, good people to work with,” and there are the students.

He said sometimes after handing out a test, while his students are immersed in it, he’ll just sit back and look at them and reflect.

“I just kind of marvel … what great kids these are, to a person,” Dixon said. “That’s a real, defining characteristic of this school.”

Dixon came to Whitman in 1990 because of the opportunity to conduct – a focus during his doctoral studies and an interest he remembers having at about age 6 when his family got a “conducting at home” record complete with a little baton.

He said Whitman’s symphony orchestra, the size of a chamber orchestra when he arrived, has grown too large for the Hall of Music’s recital hall and now performs at Cordiner Hall. The vast majority of his musicians aren’t music majors, but they are dedicated to their music. The conductor already has had a memorable grand finale: the fall 2009 concert, in which the orchestra played three movements of Tchaikovsky’s “Fifth Symphony.” “I think the orchestra played that just about as well as I remember them doing anything.”

“It has been a real honor and inspiration to have Ed as a colleague, a ‘next-door neighbor’ and a friend for the past 20 years,” said David Glenn, professor of music.

“So many times I have stopped in the office over a weekend or a holiday or late at night, only to hear him practicing, the beautiful sounds through the door reminding me that I should be doing the same thing.”

“I just kind of marvel … what great kids these are, to a person. That’s a real, defining characteristic of this school.”
– Ed Dixon, associate professor of music

In high school, while studying under renowned Hungarian cellist Gabor Ritjo, Dixon received a music scholarship to the University of Southern California, where he earned his bachelor’s and master’s degrees. To help pay expenses, he played cello for Hollywood studios that paid him, a union musician in the 1970s, $140 an hour. He also earned a $15 “carriage fee,” per union rules, every time he carried his cello from his car into the studio, he said.

He would leave that work behind, after getting his master’s degree, for a teaching opportunity at the University of North Carolina, Greensboro. At age 24, he wasn’t much older than his students when he walked into his first 8 a.m. music theory class. While in North Carolina, he also performed, including touring Europe and recording for Vox Records as principal cellist of the North Carolina Piedmont Chamber Orchestra.

While playing at the Aspen Music Festival in Colorado, internationally known cellist Zara Nelsova asked him to come and study with her at the University of Cincinnati College-Conservatory of Music. So, he would leave teaching for a while to pursue his doctorate. After that, he re-entered the professional music scene in Hollywood, but then another teaching opportunity came, from Central Washington University, where he would become a cello professor and was, and still is, cellist of the Columbia Piano Trio. And along the way there have been guest solo spots with Walla Walla and other regional symphonies.

But for the last 20 years, his focus has been Whitman.

“Dr. Dixon is a very understanding teacher who motivates everyone to practice outside of orchestra,” said Rebecca Young ’12. “He is an extraordinary cello player.”

If you listen very carefully, you just might be able to hear …

Half-way through the Cassavetes film, there are some sustained notes, quiet and mysterious cello strains, adding to the pathos – that’s Dixon and other string players.

Soon the professor will embark – with his circa-1844 cello made in Paris that he has played since 1976 – on a Florida tour with friend and pianist Eugene Flemm, who performed with him at Carnegie Hall.

So, maybe the best is still to come.