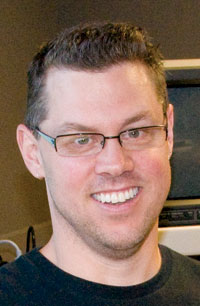 Robert Sickels, associate professor of rhetoric and film studies, has a temporary change of quarters until May 2010. Since January, he has been living and breathing the world of Hong Kong cinema at one of Asia’s largest film studies programs, as a Fulbright Scholar.

The prestigious grant gave him the time and opportunity to delve into a longtime fascination: the films of the Hong Kong New Wave, which are known for their kinetic editing and visually striking, balletic action sequences, he said.

His research is focused on reaching “a better understanding of how cultural circumstances in seemingly disparate countries half a world apart could nevertheless lead to what are spiritually very similar movements.” He will bring this broadened understanding into his Whitman classes.

About his own filmmaking, Sickels says “I’m primarily a documentarian. My specialty is taking that which is small, local and regional and casting it in such a way as to hopefully shed light on larger cultural issues through this very specific lens.”

Sickels’ new short documentary, “Walla Walla Wiffle,” was picked up by PBS recently after a programming director called it “one of the sweetest films” she’d ever seen. The seven-minute film documents the joy and child-like abandon that a group of men finds when they can leave behind adult pressures and responsibilities for a day while participating in Walla Walla’s annual wiffle ball tourney.