(At left) Clay minerals that formed inside a cavity in the basalt being studied by Courtney Porter ’10. (At right) Trichomes or hairs on the underside of a leaf of an Arabadopsis plant, the focus of biology Professor Dan Vernon’s research. The little open mouths on the background are individual stoma cells (or stomata) that regulate the exchange of CO2 and oxygen for the plant. A key feature of the new microscope: It has a cold stage and operates at room pressures, which means the cells don’t dehydrate or implode during analysis. 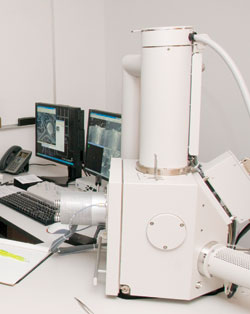 Faculty and student scientists, from geology to biology and anthropology, will use the SEM microscope, which means the instrument likely will magnify volcanic rock and fossils as often as it will cells or snake jaws.

A small, clear box with several basalt fragments represents a key part of the thesis project of Courtney Porter ’10. Each fragment, though no bigger than a coffee bean, was trapped deep underground until recently, and each piece tells a unique tale of how water and rock interacted to produce minerals.

To the naked eye, the pieces give a hint of a story, in green and reddish shades of deposit clinging to the usually black rock. But under the precise beam of Whitman’s new scanning electron microscope (SEM), those slight deposits and crevices become valleys and craters, as the surface is magnified thousands of times.

Porter, a geochemistry major, secured the basalt pieces from a drilled well at Wallula Gap through her internship this summer with the Pacific Northwest National Laboratory. The group is exploring trapping carbon dioxide underground, to rest between layers of ancient rock.

“It’s a way of keeping it from acting as a greenhouse gas,” she said. Porter is taking a close look at the basalt fragments to help determine what may have happened underground long ago, and to also help make predictions about what may occur when carbon dioxide is added. “The stability of the carbon dioxide underground will be greatly enhanced if the fluid CO2 reacts with the lava to form new minerals rich in carbonate,” said Kirsten Nicolaysen, assistant professor of geology. “The lava is ideal for this because of its naturally high abundances of calcium and iron, which are the other key ingredients for the carbonate.”

In a boost to Porter’s research, she was among the first students at Whitman to utilize the $333,000 scanning electron microscope installed at the college in January 2010.

Whitman faculty in the geology, biology and anthropology departments acquired the SEM through a $408,000 National Science Foundation grant. The new instrument replaces a more than 20-year-old microscope that relied on obsolete Polaroid film. The SEM is designed to take what is imperceptible to the human eye and magnify it onto a computer screen, producing easily shared or printed images. 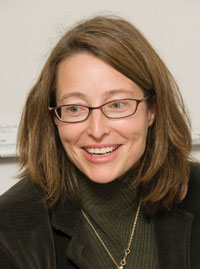 Nicolaysen was among the key faculty members who sought the SEM as a valuable resource to enhance research opportunities for faculty, students and the community.

Since the SEM’s installation, Nicolaysen and BBMB technician Michelle Shafer have led much of the orientation and training on the microscope, which combines sophisticated computer and imaging technology. Nicolaysen sat beside Porter as Porter analyzed her samples, and the two worked together at navigating the microscope’s beam over the object.

In a recent test, a fossilized shark tooth, a dead fly, and a small basalt rock each sat inside the microscope’s chamber. On the computer screen, the fly materialized, revealing its large eyes and hairy body. On even closer inspection, the hairs were distinguished individually, so that they appeared to protrude like horns or tusks from the fly’s seemingly massive body.

The SEM can magnify from six to one million times, Nicolaysen said. And it has the power to zoom in on something as small as 3 microns, or three-millionths of a meter. So cells, for example, can be easily displayed and explored using the instrument. The chamber of the microscope can also adjust airflow and control moisture so sensitive specimens, such as cells, retain their form.

Because a variety of departments, from geology to biology and anthropology, have an interest in the SEM, the instrument likely will magnify volcanic rock and fossils as often as it will cells or snake jaws, a particular specialty of Kate Jackson, assistant professor of biology. One student plans to use the SEM to sample volcanic rock compositions, while another student will study sediment from a glacier in Norway. Gary Rollefson, professor of anthropology, plans to examine plaster and lithic artifacts excavated from an archaeological site in Jordan dating back 8,000 years.

Reprinted with permission of reporter Maria Gonzalez and the Walla Walla Union-Bulletin.