The arts, natural beauty and science are recurring themes in the variety of gifts to Whitman by philanthropists Stuart and Joyce Cooper Johnston, members of the Class of 1960.

Their most recent gift embodies perhaps the best of all three. A bequest ultimately will bring to campus their Dale Chihuly collection, including seven signed “Macchias” by the internationally renowned and Northwest-born glass artist upon whom Whitman bestowed an honorary doctor of humanities degree in 2004. Stuart ’60 and Joyce Cooper Johnston ’60 have been collecting the work of Northwest glass artist Dale Chihuly since the couple returned to the region. Some pieces of their collection included in the bequest to Whitman are pictured here.

Chihuly, in his artist’s statement, describes the process of creating the “Macchias” – which means “spotted” in Italian – as looking at white fog through a stained-glass window, which “allows you to see the true colors.” Art historian Robert Hobbs describes the “natural quality” of this particular Chihuly style “through its ready acknowledgment of the effects of centrifugal force and gravity during those fleeting moments when the final form of the blown glass is set.”

The Chihuly bequest, in addition to the “Macchias,” includes a five-piece clam shell collection, two paintings and one large clam shell bowl. The estimated value of the collection is $750,000. It will join the existing Whitman art collection, which provides students and the community exposure to the arts as an essential component of the Whitman liberal arts education.

The Johnston gift honors their 50th Whitman reunion and recognizes the contributions to the college made by Tom Cronin, president emeritus of Whitman. The collection eventually will be on permanent display in a prominent location on campus, such as the Cordiner Hall foyer or Penrose Library. 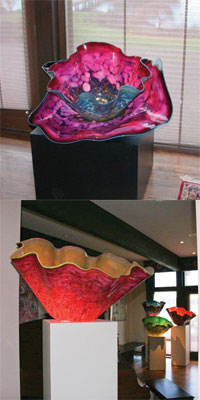 Long devoted to Whitman, the Johnstons lived in New York and California for 20 years after college. “Upon our return to the Northwest, we began a collection of local artists, which would eventually include works by Mark Tobey, Lois Graham, George Tsutakawa, Alden Mason, Dale Chihuly and a large collection of contemporary Northwest Native American coastal art,” Stuart said.

“In 1992, Dale Chihuly had produced a ‘Magnum Opus of 7’ signed ‘Macchias,’ which were being displayed at major art museums in the United States. At the conclusion of the tour, we were able to acquire the entire body of work, and we had Dale’s staff install it in our home on Mercer Island,” Stuart explained.

“Whitman College was the logical choice to eventually receive the collection,” Stuart said. The couple’s three children also graduated from Whitman: Kathryn D. Johnston ’86, David B. Johnston ’90 and C. Jeannie Johnston McGinnis ’92. “This, together with my long-time friendship with Tom Cronin, was key.”

The former Whitman president “came to Whitman at a time of challenge and change. Tom provided the leadership and the vision, which enabled the college to grow into the leading institution it is today,” Stuart said. “We are pleased to make this gift in recognition of his accomplishments and contributions to the future success of Whitman.”

Cronin, who served as 12th president from 1993 to 2005, is the McHugh professor of American institutions and leadership at Colorado College.

“I am delighted to hear about this especially generous bequest,” Cronin said. “Stuart and Joyce Johnston have been great friends of Whitman College, and this is yet another of their long series of contributions making Whitman the place it is.”

“Stuart and Joyce Johnston have been great friends of Whitman College, and this is yet another of their long series of contributions making Whitman the place it is.”
– Tom Cronin,
Whitman College president emeritus

As the Chihuly gift enriches the Whitman art collection, so too did the couple’s 1998 gift of the Johnston Wilderness Campus enhance the opportunities for student-faculty field research and college retreats. The 27-acre site with nine buildings is located in upper Mill Creek in the Blue Mountains.

The couple’s earlier gifts to Whitman have supported the Harper Joy Theatre program, the Penrose Library expansion in 1997 and the new Hall of Science in 2002.

The couple was inducted into the Stephen B.L. Penrose Society in 2008. The society recognizes donors who have given to the college cumulative gifts of $1 million or more.

An economics major at Whitman, Stuart is the founding managing general partner of The Phoenix Partners, a venture capital partnership headquartered in Seattle.

Joyce majored in English and drama. She was a member of Delta Gamma, Drama Club and the Pioneer staff, and served as vice president of ASWC. She also was selected to be a member of Mortar Board, Arrows, Signet Table and Spurs honoraries. She has since chaired the Class of 1960’s 25th reunion and volunteered as a class representative.

Stuart and Joyce will join Class of 1960 classmates in celebrating their Whitman 50th reunion during Commencement weekend, May 20-23, 2010.