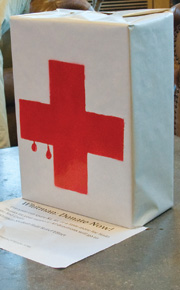 Dozens of these Red Cross donation boxes were set out across campus.

Within days of the Jan. 12, 2010, magnitude 7.0 earthquake that devastated Haiti, members of the Whitman community – students, faculty and staff – mobilized to raise funds for the relief effort. 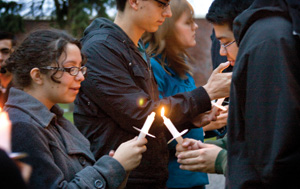 On behalf of the company he chairs, John Stanton ’77, a Whitman trustee, accepted the U.S. Secretary of State’s Award for Corporate Excellence in December 2009 for its positive impacts on Haiti’s economy and the firm’s philanthropic work in the country.

Little did he know the company, Trilogy International Partners, would soon face its most monumental service mission ever, as it took action to repair its wireless phone system – a true lifeline – and help a devastated country.

Company officials learned soon after the Jan. 12 earthquake that five members of its 571-person team died, more than 120 had lost

immediate family members and 381 had lost their homes. One of the first aircraft to land at Port-au-Prince airport held Trilogy’s engineering team. Trilogy went to work restoring its Haitian wireless operation, crucial in a country of fewer than 100,000 land-line phones for 10 million residents. The Wall Street Journal on Jan. 21 would report that “some people trapped under collapsed buildings” were able to text their whereabouts to alert rescue workers.

“We are essential infrastructure on a normal day,” said Stanton. “In times of crisis, the most important thing is keeping our system on the air.”

Trilogy also helped local government, police and fire departments with communications-equipment needs, donated more than 20,000 phones, gave free service to emergency responders and relief organizations, offered heavily discounted and free services to Haitian citizens, and established a tent city for Trilogy employees. In collaboration with the U.S. Embassy, it participated in Mission 4636, which enabled mobile phone users to text a free request for medical help or food. It also worked with the American, Irish and Israeli relief efforts and the International Red Cross to send text messages with health-related information.

Trilogy International Partners, based in Bellevue, Wash., is the largest U.S.-head-

quartered company operating in Haiti and provides one-third of Haiti’s phone connections through its wireless subsidiary Voilà. The company is one of the largest employers in Haiti and has operated there for a decade.

Secretary of State Hillary Rodham Clinton said during the December awards ceremony that the company is “helping to develop the social and economic conditions that will move Haiti further down the path to progress.” She said Trilogy “has funded more than 7,000 primary school scholarships in Haiti, making it the largest corporate scholarship sponsor in the country.”

The company also has set up a computer lab in Cite de Soleil, Port-au-Prince’s poorest slum; built computer labs, water stations, basketball courts and sponsored cultural festivals. It is the corporate partner of musician Wyclef Jean’s foundation, which focuses on youth and education.

Stanton, who has a master’s degree in business from Harvard University, co-founded three of the largest wireless communications companies in the United States, including McCaw Cellular Communications, Western Wireless and VoiceStream (now T-Mobile). He credits his Whitman College liberal arts education as the foundation for his success.