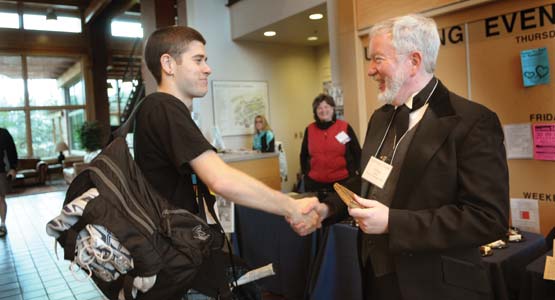 The Rev. Cushing Eells, looking dapper for 200 years old, greets Skyler Bissell ’12 in Reid Campus Center on Founder’s Day. Eells is portrayed by Rogers Miles, senior adjunct assistant professor of religion and general studies, who plays the role occasionally at Fort Walla Walla Museum, alumni events and at least once a year in his “Religion in America” class. Cathy Highberg Williams ’70, the Alumni Association board member who helped organize the event, is shown in the background. 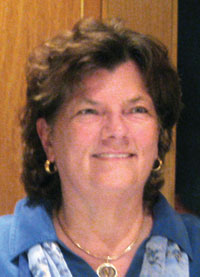 On the 200th anniversary of the birth of the Rev. Cushing Eells, the Whitman College Alumni Association revived the on-campus celebration of Founder’s Day and asked students to consider a few historical questions as well as this philosophical one: What do I know about the history of the place I inhabit?

The fun stretched across campus with nearly 20 questions – on signs posted on buildings and perched in key locations (see Whitman History 101, below) – that challenged students with history trivia questions; the answers were printed in the Pioneer. One question asked when co-ed dormitories were introduced at Whitman. That change suggests why drawing students’ attention to Whitman’s history is so important to the Alumni Association’s Documenting the Past Committee and its chair, Cathy Highberg Williams ’70. 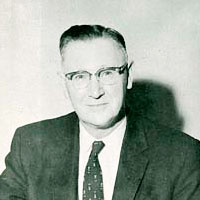 History, especially Whitman history, is very important to her in part because it’s a family matter. Lyman Hall was named for history Professor William D. Lyman, the uncle of her mother, Mary Bower ’33. Williams’ father is the late math and physics Professor Ivar Highberg ’32, who taught at Whitman from 1936 to 1947. And one or more members of her extended family have attended Whitman in every decade since the teen years of the 20th century.

“I liked the feeling of family that Dr. Penrose (Whitman President Stephen B.L. Penrose) always talked about,” Williams said. “One generation overlapping and touching the lives of another.” Essential to this sense of family and continuity are an understanding of what came before and a connection to the memories of student life, not only during a student’s own class years, but also those that came before and after, she said.

Long interested in sharing and preserving this history, her retirement from a 37-year career in communications with the Weyerhaeuser Co. allowed time to consider this project. A flood swept her in.

Wet-bottomed wooden trunks in her father’s basement demanded immediate attention. She began sorting. Among the treasures: the diary her mother had kept while attending Whitman; and photos of Aunt Helene Bower ’23 in her Whitman cap and gown, and fellow students dancing in the old gym, located where Olin Hall is now.

Williams was reminded again that, “There is so much more going on other than academics in your short time here.” These other things that make up student life, from dances to basketball games, “are a wonderful part of the experience and a record of them should be kept for other generations,” said Williams, of Auburn, Wash., during a trip to campus. 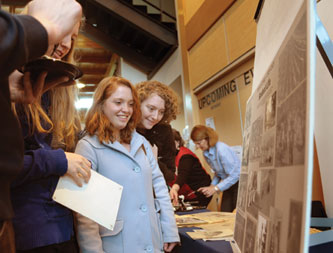 Students enjoy photos of campus life in the 1920s.

The Documenting the Past Committee wants to preserve these personal memories along with the particulars of the college history.

The committee, formed by the Alumni Association in 2005, works in concert with the Whitman College and Northwest Archives to encourage alumni to send memorabilia – items that shed light on student life, including diaries, correspondence, photographs, scrapbooks, course-related materials, records of student organizations and activities – to the archives. Recent reunions have included open houses at the archives to invite alumni to see what has already been preserved.

Williams’ admonition to her daughter, Kelly Williams ’01, is this: “Don’t throw away your pictures. And don’t let your friends throw away theirs. And put names on the back!

“The Founder’s Day event is a great start to get these students interested in learning Whitman’s history and leaving their own footprints behind.”

To donate items to the Whitman College and Northwest Archives, call archivist Michael Paulus at (509) 526-4731 or e-mail paulusmj@whitman.edu. 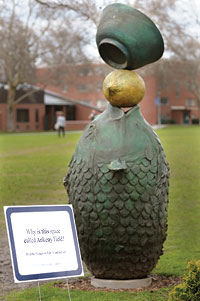 “Who is Cushing Eells?”

The founder of Whitman College.

Feb. 16 is the day Eells was born in 1810. And the day he died in 1893. During his lifetime, he founded Whitman Seminary, ultimately Whitman College, which received its status as a four-year, degree-granting college in 1883.

“Why is this green space called Ankeny Field?”

It was created in 1904 and named for U.S. Sen. Levi Ankeny, who provided the funding for “this fine athletic field on the grounds north of Billings Hall.” Billings Hall – yet another sign explained – was located on the site of what is now Maxey Hall (1972-present). Built in 1899, Billings variously served as a men’s dormitory, classrooms and the science building.

“When were co-ed dormitories introduced to campus?”

In 1974 Lyman House, Jewett and Anderson halls, and New Dorm (now Douglas Hall) all housed both male and female students.