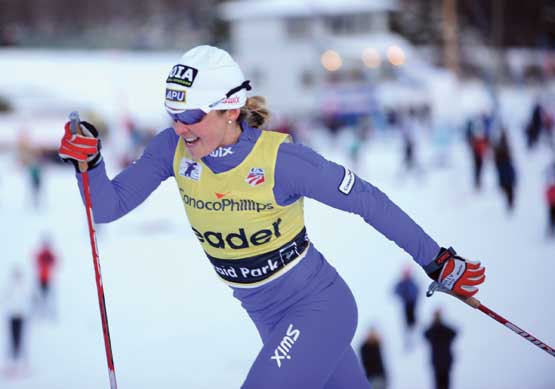 Brooks during the prelims at the U.S. Cross Country Ski Championships on Jan. 8, 2010. 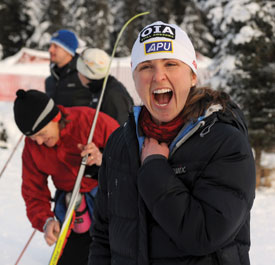 An ecstatic Holly Brooks ’04 greets her masters training group at Alaska Pacific University Nordic Center on Jan. 26, 2010, shortly after she heard she made the U.S. Olympic cross country ski team.

Days of anxious waiting ended joyfully for Holly Brooks ’04 when she learned in late January she had been named to the 2010 U.S. Olympic cross country ski team. At the Olympics, she finished in 42nd place in the 10 km Individual and 57th in the Ladies 15 km Pursuit.

Brooks, an alumni admission representative, says "The Olympics were an amazing experience for me. I am still trying to figure out the best way to describe the Games but you could say that everyday I was surrounded by the pursuit of excellence, perseverance, sacrifice and hard work — not to mention some of the best athletes in the world!

"It was especially meaningful to have a surprise spectator cheering for me on the course, long-time Whitman ski coach Tom Olson. I will cherish my Olympic memories, just as I do my Whitman memories, for years and years to come.”