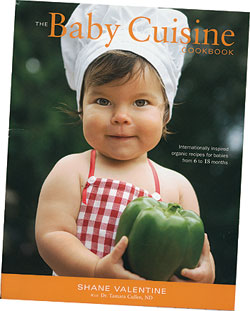 Alina Valentine inspired mom and dad’s business, Alina’s Cucina, and is pictured on the cover of their first cookbook.

In early February 2010, days from giving birth to twins, Chantal Conkling Valentine ’96 and her husband, Shane, were busy with the details of a different offspring: Their international baby cuisine cookbook, which was beginning to draw the attention of regional and national food distributors.

“It’s pretty amazing, the reaction we’re getting,” said Chantal, who initially promoted “The Baby Cuisine Cookbook” by walking from business to business in downtown Seattle “with my big belly.” The effort paid off. The cookbook and Alina’s Cucina — the entrepreneurial venture that launched it — are represented in Seattle retail outlets from children’s boutiques to bookstores.

Alina’s Cucina, named for their toddler daughter who graces the cookbook cover, is built on the concept of fresh, flavorful, organic baby food recipes that know no international boundaries. Along with recipes for babies 6 to 18 months old, the Valentines blend in advice from their naturopathic pediatrician, who reviews all the recipes. When should you start your baby on solid foods or introduce certain foods? How can you incorporate special diets, such as vegetarian foods?

Turkey Bolognese from Italy, Khichiri (lentils and rice) from India and Beef Satay from Thailand are a few of the cookbook’s featured dishes. Alina Cucina’s signature dish is Chicken Parmesan, one of Shane’s favorite dishes growing up on Long Island, N.Y., where he would “run to the neighborhood pizzeria to get it.” Shane writes in the cookbook: “Believe it or not, this is one of the first dishes I made for Alina, and I am so thrilled to see her enjoy it as much as I do. I puréed this for Alina when she was around a year old, but it did not take long until I was able to cut it into small pieces for her to devour.”

“The Baby Cuisine Cookbook” is available online at www.alinascucina.com.

The Valentines started this journey in early 2008, when Alina was 6 months old. Shane quit his corporate job to pursue his two passions: culinary arts and teaching. At the time, Chantal, who has spent her professional career managing nonprofits, was working out of their home for “Youth for Understanding,” a foreign exchange program for international students who attend a year of high school in the United States. As Shane began searching for solid foods to feed Alina, he discovered few resources for parents who wanted to prepare their own baby food. A search for “baby food” on FoodNetwork.com yielded only recipes with baby carrots in the ingredients, Chantal said.

“I started calling my international contacts, friends around the world. I asked them, ‘What do you feed babies in Thailand? In China? In Venezuela?’ Their responses: ‘They eat what we eat,’” Chantal said. “That made sense. But we had gotten away from that in the United States. People here are used to jar baby food. There’s nothing wrong with that, but we now realize babies can eat flavorful things.”

And from that thinking, Alina’s Cucina emerged. Chantal quit her job to manage the marketing side of the endeavor, which includes a Web site that will allow parents around the world to share recipes, resources and parenting tips. Shane began to write the cookbook, and the family began filming cooking sessions to demonstrate how to make his recipes.

“We have Alina in the high chair and Shane is cooking. I got a little taste of being on camera, and I love that, too,” said Chantal. The cookbook includes a bonus DVD with the family making the recipes that are in the cookbook.

Cleanup after the cooking sessions was easy. “We ate the rest.” They discovered that friends they had shared the recipes with loved the food and finished the leftovers, too.

“The recipes are really so good; they’re for the whole family. It’s not like you have to make a separate meal for baby and family,” Chantal said. “We just think it’s so important to get your baby to the table to eat with the family.”

The book distributors she has worked with in Seattle and Colorado must think so, too. Whole Foods Market regional representatives immediately began talking distribution to multiple regions, which will include more than 65 stores. “We’ll be nationwide later this year,” Chantal said. “That’s not including other natural food markets, children’s boutiques, cooking stores and naturopathic doctors’ offices.”

There are other organic baby food cookbooks out there, but none, she said, incorporate the flavors of the world, a feature she thinks her Whittie classmates will appreciate. 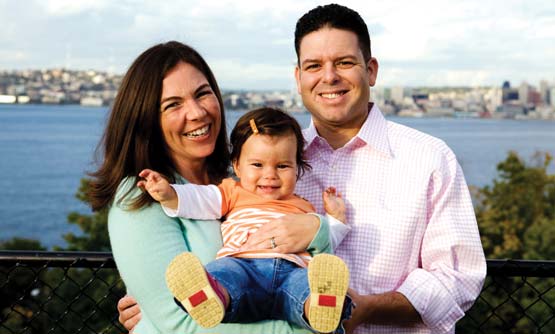 Chantal Conkling Valentine ’96 and her husband, Shane, live in Seattle with daughter Alina, who is now 2. On Feb. 6, 2010, the Valentines expanded their family when Chantal gave birth to twin boys, A.J. and Dario. No pictures were available at press time.