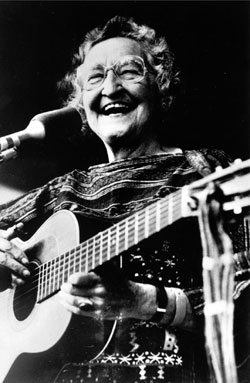 Faith Petric ’37 has performed at folk festivals in the United States, Canada, Ireland, Europe and Australia.

Faith Craig Petric ’37, a 94-year-old professional folk singer who may consider retiring this year, was riding on a San Francisco bus recently, minding her own business, just sitting, just being – completely unaware of the impact she had had on a stranger on that bus.

But then, unexpectedly, this fellow passenger sat beside her, introduced himself and revealed to her the role she had played in his life.

Recognizing her as the woman from the 1960s who had hosted Friday night song swaps and jam sessions of the San Francisco Folk Music Club in her historic Haight-Ashbury District home, he told her that as a teenager he had attended them and that, “It saved my life,” he said.

He didn’t elaborate. She didn’t ask. She knows what music can do. They talked folk music – that art form that has such power to inspire and move people, says Petric, a singer who can sweetly float poetry in one song and then level verbal grit at the world’s injustices in the next.

Petric, who has among her admirers long-time friend and folk legend Pete Seeger, is known as “The Fort Knox of Folk Music” because of her memory: She knows the lyrics, tunes and histories of more than 1,000 songs.

Requests for these songs are frequent, coming in by letter, phone and e-mail. People know where to go. And if they want to participate in a Friday music session, they still can – after all these decades, in that same home. Everyone is welcome: skilled performers, beginners and listeners. Music starts at 8 p.m. and goes to the wee small hours. Several bands – and marriages – have resulted from people making music together there, she said.

In addition to working as a traveling folk performer, Petric has for the past 20 years written a regular column, “The Folk Process,” for Sing Out! magazine and contributed a series of articles, “Behind the Song,” giving the derivation and history of some well-known folk songs. She also is a board member of the San Francisco Folk Music Club, at its free Folk Festival and other club activities. Other memberships include the Freedom Song Network, National People’s Music Network and the Children’s Music Network. She is a union member of The American Federation of Music Local 1,000 and the Industrial Workers of the World, the IWW, Local 630.

Faith doesn’t remember a time she didn’t sing. At age 5 she was singing hymns in an Idaho Methodist church where her father preached. At home they sang contemporary sentimental songs such as “Juanita” and “The Old Oaken Bucket.” At age 9 with her brother she memorized and sang cowboy songs. Current favorites of hers include songs of workers and love, traditional ballads, women’s, men’s and children’s songs, socially conscious, western, funny-outrageous songs and many more, she said.

Her high school years in Moscow, Idaho, were in the heart of the Depression. When she came to Whitman in 1933, she was on her own financially. “No one gave me 5 cents, I had to work my way through,” she said. While majoring in sociology, Petric worked 40 hours a week, holding down many jobs, including cleaning dorms, waiting tables at a hotel and spending two hours a day reading to then Whitman President Stephen Penrose, who was blind. “Mostly pretty high-class literature I didn’t understand a word of,” she said. It also was a tough time for the college’s professors who were being paid half-salaries.

The world’s economic and political realities, combined with Whitman professors’ teachings, educated her “closer to the reality of how the world worked. Getting some facts as compared to the pabulum dished out in grade school and high school was something of a shock,” she said.

After graduation she spent a year working in a Seattle bookstore, saving money and intending to travel the world. She took a freighter from Seattle to San Francisco. From there she planned to travel first to Japan, get a job, work, save and then go on to the next country. But Japan invaded China, World War II emerged, postponing the trip for 35 years. Eventually, Petric embarked. She hitchhiked through Europe, the Middle East and Asia, then took a freighter from Singapore to Japan and back home – a 16-month journey.

Her interest in folk music, songs that often “tell the truth about history,” intensified in 1943 while she was doing “war work” in a shipyard in New Jersey and living in New York City. There she was befriended by musicians who were leaders in the burgeoning national folk music revival.

“I believe there is no human experience, emotion, aspiration that has not been chronicled in folk songs,” Petric said.

She said it was Joe Hill, a labor song writer and organizer, who pointed out that songs are a better organizing tool than pamphlets.

“Songs are remembered,” Petric said. “Plus they can carry strong emotional impacts that stir people to action. Indeed, songs can be so powerful that even in contemporary times some are banned.”

She learns songs strictly by ear, and at one time she learned a song a day by listening to tapes while driving to and from work. Petric opened a recent San Francisco peace demonstration, leading the demonstrators in a well-known peace song, “Down by the Riverside.”

But her first public singing experiences were during the l950s and 1960s in San Francisco at friends’ parties and for fundraising events for causes. After she retired at age 55 from the California State Department of Rehabilitation, she focused full time on music. She and friends formed the Portable Folk Music Festival and toured, performing at festivals, folk music clubs, parking lots and for anyone anywhere who would listen.

“Bit by the bug,” she became a traveling folk singer and for the next 40 years, accompanying herself on guitar, worked festivals and folk clubs in the United States, Canada, Ireland, Europe and Australia.

“This second career is most rewarding,” she said. “Work before this was just jobs.”

Petric said performing and being immersed in the world of folk music is enormously satisfying – and demanding. But when she has finished a performance, the nonagenarian – holding her 1927 Martin guitar that she has played for the last 50 years – isn’t tired.

“The adrenaline is flowing,” she said. “Performing is very stimulating, invigorating.”

Don’t call her “94 years young.” She won’t like it. “I’m not youthful. I’m oldful,” she once told a San Francisco Chronicle reporter. “The idea that youth is the only time in life that you’re vital, interested, interesting – that myth makes millions of dollars for people who advertise that if you look older there’s something wrong with you …

Faith Petric has received numerous awards and honors, including:

To contact Petric, who has CDs available, e-mail faithpet@gmail.com.