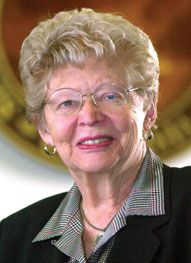 Born on July 4, 1919, in Council, Idaho, Miller was perhaps destined to spend her life in public service.

At Whitman, she earned a bachelor’s degree in chemistry, was a member of Alpha Chi Omega and four honoraries: Arrows, Phi Beta Kappa, Signet Table and Spurs.

She went on to earn a master’s degree in political science from the University of Pennsylvania and complete additional graduate work at the University of Montana in Missoula. She worked as a laboratory technician, then a research chemist before joining the dean of students’ staff at UM. She was associate dean of students there when Montanans elected her as state superintendent of public instruction in 1956, a position she served in until 1968.

She was director of the American Association of Retired Persons (AARP) in Washington, D.C. President Jimmy Carter appointed her to serve on the Occupational Safety and Health Review Commission and other federal commissions.

Miller served as a Santa Barbara City Council member from 1987 to 1995, when she became mayor, a post she held until 2001. She served on the boards of the League of California Cities – from which she received a lifetime achievement award in 2008 – and the National League of Cities and the Institute for Local Government.

She was active in community service and support of the arts and youth projects. Santa Barbara honors an outstanding student each year with the “Harriet Miller Youth Leadership Award.”

A Whitman overseer from 1983 to 1998, the Whitman Alumni Association honored Miller with the Alumnus of Merit Award in 1970, and the college bestowed upon her a doctor of humane letters in 1979.

Hayes attended Whitman as part of the Navy V-12 training program in 1944 and 1945. He went on to attend the University of Washington, graduate from Yale College and serve in the Navy during the Korean War. He married Harriet “Sis” Sterling in 1951.

He owned and operated CWS Corporation from 1966 to 1986, and later managed family forest properties. Hayes served as a Whitman overseer from 1972 to 1982.

“His advice and support was sought by many, and was always generously provided with understated good humor,” according to an obituary in The Oregonian.

In addition to his wife, Hayes’ survivors include children Anna Hayes Levin and Peter Hayes, and grandson Ben Hayes ’11.