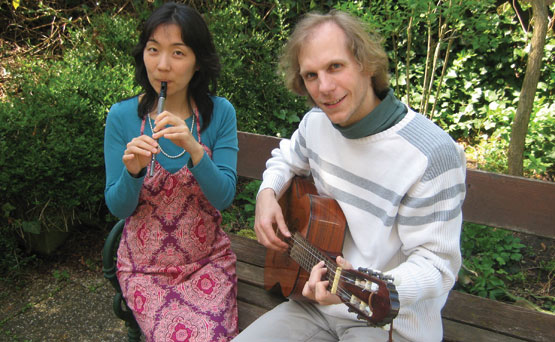 When Diethard Pabel ’98 and Eriko Aoyama-Pabel ’97 christened their new CD “Listen to the Wind,” they were not thinking of the gusts of Gundelfingen, their German home. The name did evoke the toy-store tin whistle whose melodious whisper carries through the CD’s 17 tracks. But more than anything, this German-Japanese couple’s Irish-American CD reflects its roots in a small liberal arts college in southeastern Washington. The beautiful wide-open skies and fields pictured on the CD are not snapshots of Ireland, but of Walla Walla.

“For us, that’s where this music comes from,” Eriko says.

Eriko and Diethard didn’t find each other – or Irish music – until the spring of Eriko’s senior year, when Diethard was a German exchange student at Whitman. And though Eriko, a music major, had played the oboe for years, and Diethard was skilled with both guitar and violin, that spring was something different.

View an online performance of “Amelia” and other songs from the couple’s television appearance.

“All of Walla Walla seemed to be full of music,” recalls Diethard. “There were performances on Main Street every Thursday; live music at the farmers’ market; occasionally gigs by the Ryegrass String Band at the cozy café called Merchants and music at countless campus events.”

Most important of all, perhaps, was that Diethard’s “friendship mother,” Sandra Cannon, took him to monthly contra dances with the Wednesday Night Band, where Eriko joined him. The lively rhythm of contra dancing – a sort of folk dancing done with partners in lines – appealed to Eriko.

“I found the social aspect of folk music attractive,” she said. “You can combine instruments freely, make variations and improvise, and accompany dancing.”

Her oboe, in turn, appealed to the musicians, who invited her to join the band. The tin whistle, featured on this CD alongside Diethard’s guitar, was a later acquisition – something she purchased for just $5 at a toy store and taught herself “during study breaks” while studying musicology at the University of Cincinnati. Diethard’s guitar also has undergone intercontinental journeys, surviving numerous trips through England, France and Spain, as well as a six-month sojourn backpacking in Australia, where Diethard recounts that “the extreme heat damaged it a little bit.”

Though both call the CD a side project of only 1,000 copies, the pair put on a CD-release concert in May 2009, have played for parties and friends, and performed on German television in September 2009. Though the station was primarily regional, it was accessible from other parts of Europe, and the couple received enthusiastic responses from viewers as far away as Switzerland and Liechtenstein.

“All of Walla Walla seemed to be full of music.”
– Diethard Pabel ’98

The final song on the CD, “Amelia,” signifies not an end, but a beginning: It bears the name of their daughter, Saya Amelia, born in October 2009, whose first name is Japanese and means “vibrant colors.”

In their stunning palette of experience, Diethard and Eriko still recall their Whitman years with particular fondness.

“What I cherish the most from my Whitman experience is the diversity,” said Eriko. “I, as a Japanese citizen, was able to study abroad in Vienna, and met my husband, who was a German native speaker, at Whitman. The contacts and friendships through the four years, be it in classrooms, dorms, interest houses or music projects, opened my eyes and heart.”