He was a laser after he graduated, pointed toward only one place, one city, one street, one address, one door.

The only door he wanted: playwright Moisés Kaufman’s in New York City.

“I had my Whitman thesis in my hand when I showed up at his office,” said Jimmy Maize ’02, whose Whitman College thesis was on Kaufman’s techniques and theater company.

“I met (with) him the first day I was in New York. I told Moisés I had to work for him no matter what,” related Maize, who recently was selected by the Whitman College Alumni Association as the recipient of its 2010 Pete Reid Award for Young Alumni for his work in the theater – a rising star.

Maize said he had the confidence to approach Kaufman because of the quality of the document in his hand, developed over many drafts with the extraordinary guidance of his thesis adviser, Debby Holmes, associate professor of theatre. And he had confidence because of the depth and breadth of education and personal development gained during his years at Whitman.

Kaufman gave him a job – first as an intern and reading scripts, then in development and grant writing and general management alongside Kaufman, who quickly became Maize’s artistic mentor. Eventually, Maize became an assistant director for everything Kaufman’s company, the Tectonic Theater Project, did, including “33 Variations” on Broadway, starring Oscar-winning actress Jane Fonda.

Along the way, Maize – who wrote the award-winning play “In One Room” – created The Theater Bureau, a Brooklyn-based theater company for Whitman alumni, for which he is artistic director and has written several plays. He also has done stage management and technical work for various productions, and acted in New York productions and with repertory theaters in California and Colorado.

Other projects: He’s studying for his master’s degree in fine arts/directing at Columbia University and is writing a new play on recent court cases dealing with separation of church and state and the teaching of intelligent design. He will work on an opera this fall that will be presented at New Victory Theatre in Times Square. And he was the dramaturg on a Kaufman production that in 2009 was presented simultaneously by 150 theaters internationally – “The Laramie Project: 10 Years Later,” an epilogue to “The Laramie Project,” a play based on interviews in Laramie, Wyo., after the 1998 beating death of Matthew Shepard. 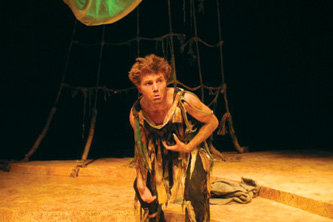 Jimmy Maize ’02 plays Caliban in “The Tempest,” one of many productions he starred in at Harper Joy Theatre. Maize is among more than 250 alumni, friends and family who will gather on campus April 23-25, 2010, for the Harper Joy Theatre reunion.

“Jimmy’s dramaturgy and contribution to the writing were instrumental in fleshing out the themes and narratives in the piece,” Kaufman said. “His insight, knowledge and craft were invaluable throughout the entire play-development process.”

Maize boils down the successes of Whitman alumni in the New York City theater world to “life skills, worldliness and personal growth.” For him, the overall Whitman experience resulted in a “reaffirmation of myself as a person, how I interact, communication skills, life skills.” He knows talented people from other backgrounds who have left New York City quickly after an attempt at a career. “They don’t have a personal foundation to fall back on.” But Whitman alumni have a “common vocabulary – confidence with themselves on a deeper level.”

He said that at Whitman, the “very disciplined, very academic, yet fun-loving” Nancy Simon, Garrett professor of dramatic arts and professor of theatre, “really stepped up what I expected of myself.” But when he was ill with a bronchial infection and lost his voice while cast as the lead in an upcoming play, Simon took on the mother role, getting him to the doctor, making sure he took his antibiotics. And when he was well enough to get involved with rehearsals and blocking, but still didn’t have a voice back, she would speak his many lines while he mimed the words. “She really cared so much. She’s the glue that keeps the department together.”

As Maize, who grew up in Medford, Ore., reflects on Whitman’s theatre program, he appreciates “the quality and scope of programming and the artists they’re able to bring” to Harper Joy Theatre. “In hindsight I realize how unique it was.”

He is humbled to be in the great company of past Pete Reid award recipients, “all of whom are doing such important and relevant work all around the world.”