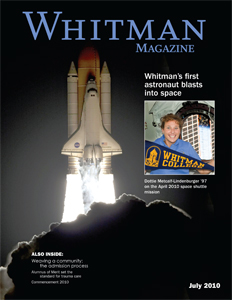 On April 5, 2010, Dottie Metcalf-Lindenburger ’97 became Whitman College’s first graduate in space. She and fellow STS-131 crew members completed a shuttle mission to supply the International Space Station. A little more than a month later, on May 22, Metcalf-Lindenburger returned to her alma mater to speak at Baccalaureate. At Commencement on May 23, Whitman bestowed upon her its first Civis Magnopere Laudanda Award for “Citizens Worthy of Highest Praise.” (See Commencement 2010.)