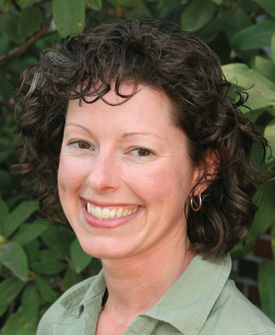 Until recently, the daily weather report on campus could have been described as a deluge. Not of rain or snow, but of mail. In January alone, up to five tubs of mail a day were delivered to Anne Thatcher ’97, associate director of admission, and her Whitman College admission colleagues.

“I was spending hours and hours a week hauling files around. My fingers were full of paper cuts,” Thatcher recalled. The same was true for other admission officers and the support staff.

This year, only time has been cut.

Culminating a three-year conversion, the admission process — from submission to review — is now electronic. All 4,000 applications (3,300 students completed the application process) that arrived at the office this year were received online or scanned into a computer.

“We are one of a handful of schools to accomplish this transition,” Thatcher said.

“When I tell colleagues from other colleges and universities that our application review process is completely electronic, their jaws drop in amazement.”

Other schools that have converted usually turned to an outside company to manage their system, but Whitman found a more efficient and inexpensive solution: in-house ingenuity.

Thorin Zanger, admission technology specialist, developed most of the necessary interfaces himself rather than relying only on a commercial software package. He describes his system as an efficient conglomeration of multiple Web programs created specifically to suit Whitman’s needs. This system interfaces with a software called Document Locator from Columbia Software of Portland, Ore., which is headed by a Whitman parent, Richard Day.

This in-house program has made the transition easier, said Thatcher, because key parts of the admission process, like “vote sheets” — an internal document admission officers use to rate applicants on their academic and cocurricular achievements and write several paragraphs of comments — didn’t have to be removed, but simply shifted online.

The extraordinary thing about an online document is that it is in a single electronic location but can be read simultaneously by multiple officers in different locations.

“Officers needing to see a file are no longer limited by geography. They can read from home, a conference, or even an international trip,” Zanger said.

“Admission officers have certainly benefited from the electronic system, but for support staff it has been integral to the overall workflow,” said Kevin Dyerly, director of admission.

The process is a “huge improvement” over shuffling around paper files and folders, agreed Barbara Cox, admission credentials coordinator. Support staff especially like the fact that everything’s in one file, and they can work on it even while admission officers are viewing the information, she said.

It’s also much easier to track the components of a student’s application, Cox said. If a student believes he or she already has submitted a recommendation or transcript, but it isn’t in the electronic file, support staff can easily access the electronic file and then the electronic archive to confirm whether or not the document was received. To track down stray documents in years past, the admission staff audited all the student files twice a year, in the middle of the admission cycle and again at the end. 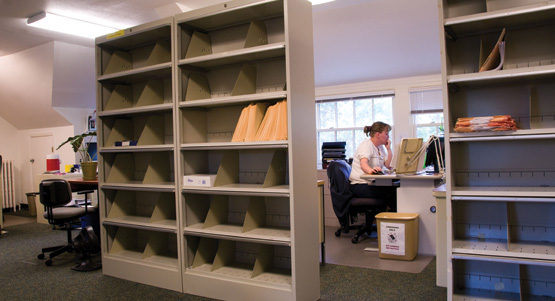 No nostalgia for the way it was

Before the technological transformation, the third floor of the Office of Admission in Penrose House was crowded with long bookshelves filled with files for each applicant (now virtually bare – see photo above). Tubs arrived every day, and admission staff spent hours opening mail, sorting through the many pieces of student applications (which don’t always arrive in one neat packet), alphabetizing, filing and then recording what had been received into a database.

As each application was completed, it was sent to the appropriate admission officer to be read. “Picture blue crates, each with an admission officer’s initials, full of paper applications,” Thatcher said. During the peak period, admission staff sorted about 700 applications a week to place in the crates. As an admission officer read a file, he or she made notes on paper, passed the notes along to other officers for their comments, then returned the file to support staff to record the status (admit, wait list, etc.).

After the decision letters and financial aid offers were mailed, the phone calls began. “For every question, the officer had to go up to the third floor, find the paper application, look for information and return the call.” Then the file went back to the stack to be re-filed.

“If one person needed the folder for a few days, another person had to wait for the file to be returned,” Cox said.

For Bruce Jones ’67, associate director of admission in the New England office, the new process has quite literally lifted a weight from his workload.

“The office used to ship me boxes of paper applications,” he recalled. “I groaned every time the FedEx truck showed up. I’d hand-write my comments on a vote sheet, bundle up the files, wrap them in a garbage bag against potential water damage and ship them back.”

The transition from paper-based application to electronic has been a three-year endeavor with countless hours spent each summer in work groups to reconfigure the process and work out the kinks in the system.

The effort has resulted in more than95 percent of prospective Whitman students applying online. Some of their additional materials arrive via e-mail, mail and fax, and are added to an electronic application created for each student.

“This past year was the first time we placed all application items electronically into Document Locator, rather than printing everything, scanning it and uploading,” Thatcher said.

“When I tell colleagues from other colleges and universities that our application review process is completely electronic, their jaws drop in amazement.”
— Anne Thatcher ’97
associate director of admission

“Now when a student calls to check on an application, the officer opens the e-file. They can see each item submitted, open and review them, and let the student know instantly what has arrived and what’s missing,” Thatcher said.

Instead of shuffling paper, Jones and other admission officers are able to devote their time to reading the applications online, whether they’re in the office, at home or on the road.

When it comes time in March to decide which students to admit, admission officers still gather in the Penrose House conference room to evaluate each application. But now instead of reading to their colleagues from a paper file, they can all view each application as it’s projected on a big screen.

True to Whitman’s commitment to environmental principles, the new process saves more than 120,000 pages of paper each year, Thatcher estimated. Not to mention the fuel to haul those tubs of applications around the country.

As the office conserves college and planet resources, Thatcher said the staff also has been careful to preserve for students the traditional thrill of receiving a Whitman acceptance letter. Students get the immediate gratification of an e-mail, but as in years gone by, they also each receive a personally signed hard-copy letter.

“I think there’s something really special about getting your letter. I still have mine,” Thatcher said.