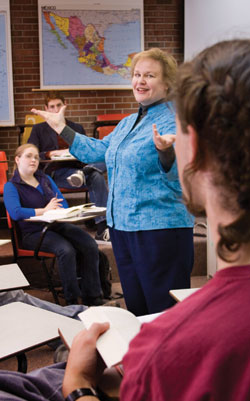 Elizabeth Vandiver is the Clement Biddle Penrose associate professor of Latin and classics, and chair of the Department of Classics. 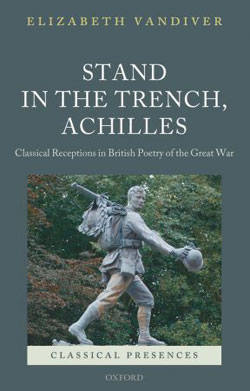 “When we think of First World War poets, we tend to think of someone who is denouncing the war, someone who is passionately objecting to the way that war is being conducted,” said Elizabeth Vandiver, associate professor of classics.

She counted herself among those under the popular misconception that war poetry is protest poetry. But then she set off to study the use of classics in this poetry and traveled to the British Library in 2005 and 2006. Working from a “marvelous” 1978 bibliography of 2,225 English poets, she found a complex range of war poetry that challenged her assumptions.

Vandiver’s research and revelations culminated in the publication of the book, “Stand in the Trench, Achilles: Classical Receptions in British Poetry of the Great War,” released in February 2010 by Oxford University Press.

She discovered poets used classics to glorify the war just as much as to object to it.

“They didn’t just think about classics; they thought in classics,” Vandiver said. “Classics seemed so widely accepted as a point of reference that the same literary sources could be used to make widely different points.”

It’s easy to imagine a well-educated man fighting at Gallipoli, inspired by the proximity of Troy, to allude to Homer and Virgil, those “well-known paradigms of war.”

What’s surprising is that just as many classical references came from men like John William Streets, who left school at age 14 to work in the coal mines. After finishing his 12-hour shift and walking 7 miles back from work, Streets educated himself in classical literature by night.

“For John William Streets, classics was poetic tradition; to be a poet, in his mind, meant to know classics,” said Vandiver, who was so inspired by Streets that she dedicated the book to him.

Vandiver found that whether men fought near the ancient sites of war or off on the western front, whether they had prestigious Eton educations or perfunctory schooling, whether they were the canonical poets or obscure writers — they drew upon the same images.

This common classical consciousness in Britain was unique among all other wars, Vandiver said.

“When the poets writing about the war thought about poetic imagery, this was what came to their minds — in a way that it doesn’t anymore,” Vandiver said.

Vandiver’s book, which the Oxford University Press calls a “pioneering study,” also has received praise from Professor Tim Kendall, English department chair at the University of Exeter, United Kingdom. Kendall attributes Vandiver’s breakthroughs to her “extraordinary acoustic memory, which enables her to tease some classical allusion out of the most unlikely places.

“Vandiver is among the most discriminating of critics,” he said. “The book is abrim with research” and is “enthrallingly written.”

Vandiver delivered the keynote address on British Great War poetry and the classics at the 10th annual conference of the Robert Graves Society in Mallorca, Spain, in July 2010. Her book is available at the Whitman Bookstore (509) 527-5274.