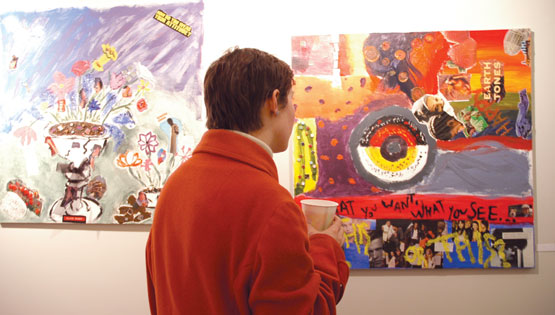 Since the Stevens Gallery opened with the new Reid Campus Center in 2002, the gallery has been a focal point of creative expression on campus, often related to issues of current relevance. This 2006 show featured artwork created by members of groups on campus as they explored group identities.

Milk crates have been mounted in the gallery to hold recordings about race issues. There has been a tree and a fireplace, cozy cardboard crannies for reading book arts. Once, a corner of the room cradled soft stuffed animals crafted behind bars. The floor, too, has been a display area, littered with artifacts from the U.S./Mexico border. For another border show, students built a fifth wall, metallic and monstrous, straight through the space.

“Every student has a different vision of what they want the space to be,” said Barbara Maxwell, associate dean of students, student programs and activities. “We’ve let people build a wall or paint the walls,” she said. “Students control what happens in the gallery.”

“What we decided was that this program would not be explicitly for art majors or faculty. We were going to define art and artist as broadly as possible,” Maxwell said of the gallery in Reid Campus Center. “We feature Craig McKinnon, a security officer who does ceramics. We feature Rich Hinz, a technology services staff member who paints.” 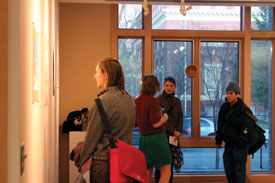 The Stevens Gallery is named for the late David Stevens ’47, a longtime economics professor. Stevens was a mentor to donor Robert Young ’55.

Few of the exhibits on display are from art majors; most come from students with an interest in expressing themselves creatively. After students were invited to partake in a February 2010 trip to the local Carnegie Art Center, the Stevens Gallery was filled with 32 works of pottery by entirely “unqualified” campus artists.

“There were no prerequisites, no insistence on a level of artistic expertise. We simply asked for students who wanted to spend the afternoon in a creative way,” wrote Kendra Vandree ’10 and Kali Stoehr ’10, student activities interns.

This semester, other inclusive projects coordinated by creative arts director Joe Cross ’11 have included a campuswide book arts project, a “write-in” welcoming students to sit and write from sunrise to sunset, and of course, the Duckfest tradition.

“Duckfest is exciting because anybody can build a duck and put it on campus somewhere,” said Leann White Adams ’03, assistant director of student activities. “It’s not art as in framed and matted art; it’s fun and playful art, and I think those shows are really successful.”

Within the limited space of the old Student Union Building only two shows were held annually: a senior art exhibition and the annual photography competition. But when Reid opened in 2002, things changed.

Before, “it was not a major part of campus life, and I doubt few people even knew it existed,” said Anna Reynolds Pawlowksi ’03, who oversaw the gallery during this transition period. “With the opening of the new building, suddenly it became this focal point of campus life. People walked by it daily.”

One of the goals for the new campus center was to create not only a student space, but also a collaborative zone for students to interact with faculty and staff. The Stevens Gallery, which now hosts at least four to five shows a semester, shares this aspiration for a mutually accessible environment.

The annual photography competition, now in its 31st year, was the original impetus for expanding the tradition of participatory art.

Just as the photography competition celebrates a larger group as photographers, the hope is that the gallery as a whole will expand the definition of artist.

In the Stevens Gallery, students reconsider their own identities and re-evaluate the way they conceive of the world around them.

“If a viewer leaves the space thinking, I would call a show successful,” Pawlowski said.

One of the most thought-provoking shows Adams recalls was a February 2009 exhibition titled “Art from the Inside.” The show featured the work of Washington State Penitentiary inmates, and included a woven basket, a tender sketch of a mother and child, and a handmade teddy bear.

“It was fascinating,” said Adams, “because you don’t think about inmates as being artists, but there were some absolutely stunning craftwork and drawings.”

Student curator Margot Wielgus ’08 recalls another memorably provocative show. In the 2006-07 academic year, Jessica Salvador ’07 held a show on race, featuring milk crates mounted to the wall, each holding CDs with recordings of texts about race. After listening, students could leave comments or respond to other student comments; the Stevens Gallery became a classroom, a forum for visual and written expression.

Salvador was “particularly interested in whether color-blindness was an appropriate stance on race issues,” said Wielgus. “Part of the point was to open a web of communication and start talking about race in the Whitman community instead of just being uncomfortably silent about it.”

Another opportunity to explore group identities was made possible by an Andrew W. Mellon Foundation Grant and the creative efforts of Leora Fire ’06 and Bethany Coleman ’06, Wielgus said. Any group on campus sharing a collective identity could paint a canvas — groups sharing a gender, racial, ethnic, religious or other identity. What Wielgus recalls most vividly was a group of students with learning disabilities who hung their canvas “on a tilt.”

“The way in which this painting brought forth something of a group identity that might be uncomfortable to talk about in another context is unforgettable,” Wielgus said.