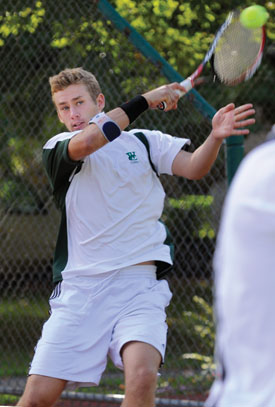 Christoph Fuchs ’10 was named to the Academic All-America First Team in June 2010. He and his senior teammates led Whitman to three Northwest Conference championships and a 64-0 regular season record against conference opponents.

And now, a straight shot to medical school

The American landscape is a spidery network of high-speed highways and freeways, but it was one of the roads less traveled that brought aspiring physician and tennis whiz Christoph Fuchs ’10 to Whitman College.

There is nothing run-of-the-mill or conventional about the travels, literal or figurative, that brought Christoph to campus. There are no public magnet schools or private prep academies in his background. He didn’t finish at or near the top of his high school class. In fact, there are no high schools of any kind on the home-schooled Fuchs’ résumé.

And there was a long family odyssey that touched the four corners of the country, capped by a side trip to Germany.

What’s more important is that once Christoph arrived on campus, there was no question he had found a happy second home.

After four years of success in the classroom and on the tennis courts, he graduated in May 2010 — a Phi Beta Kappa ring on his finger — headed to Baylor College of Medicine in Houston, Texas.

Before he departed Whitman, Fuchs and his tennis teammates made their fourth straight appearance in the NCAA Division III national championship tournament.

Though Whitman, ranked No. 22 nationally, lost its first-round match, Christoph and his senior teammates can look back on four years of unmatched tennis success. They picked off three Northwest Conference (NWC) championships during their tenure while posting a 64-0 regular-season record against NWC opponents.

Christoph held up his side of the court, winning more than 100 career matches in singles and doubles. In June 2010 he was named to ESPN The Magazine’s Academic All-America First Team, an honor awarded by the College Sports Information Directors of America.

For Christoph, the long, winding road to Whitman began in November 1996.

He was 9 years old at the time, the eldest of four children, when his family pulled up stakes in Wausau, Wis., and hit the road for a yearlong family excursion.

His father, Dr. Axel Fuchs, was in private practice as an obstetrician-gynecologist and “working all the time,” Christoph said. “My dad and mom (Valerie) decided they wanted to leave Wausau and travel around the country. It was a great opportunity to spend time together as a family and find a new place to live.”

“I can vouch for a Whitman faculty that goes the extra mile to help you meet and exceed their ambitious expectations.”
— Christoph Fuchs ’10

From the backroads of the Badger State, the family climbed into a GMC Suburban — a 39-foot travel trailer hitched to the back — and headed south.

“We worked our way down to Florida, stopping to spend some time in Louisville, Ky., with mom’s family,” he said. “We spent the winter in Florida and saw everything from Sea World to crocodile farms to orange groves. We must have visited the Kennedy Space Center a dozen times.”

Part of the family’s traveling plan was that Valerie Fuchs, a graduate of Ohio’s Miami University, would home-school the children.

“After Florida, we slowly worked our way west to Arizona. We spent some time in New Orleans during Mardi Gras, which was quite an experience,” Christoph said.

“We spent about three months in Arizona on a Navajo Indian reservation where my dad worked in a hospital. As a family, we learned a lot about the Navajo culture. We spent a lot of time exploring the canyons and the 12th century Anasazi civilization ruins.”

After a summer in the Portland, Ore.-Vancouver, Wash., area, the Fuchs family headed to Germany to visit the other side of the family. (Dr. Fuchs, a graduate of the medical school at Germany’s University of Düsseldorf, had come to the United States as a young man, recruited to help with breast cancer research at the University of Louisville’s Brown Cancer Center.)

When the family left Germany to return to the United States in January 1998, they settled in the Vancouver area.

“My parents bought a home in the country half an hour north of Portland. Because home schooling was working well for us, we decided to continue rather than commute to Portland,” Christoph said. “Most of the time we worked through a correspondence program taking honors classes in which a teacher/evaluator sent us lesson plans and graded our work.”

Every situation has its trade-offs, he said, and his home schooling was no exception.

“I think I matured at a young age. I learned a lot about self-motivation, time management, planning and following through.

“On the other hand, there was part of me that always thought about going to a regular school. Later on, from a social standpoint, college was a greater adjustment for me because I didn’t have as much in common with students who spent their entire lives in public or private schools.”

Soon after the family took root outside of

La Center, a small town near Vancouver, his mom “signed us up for various athletic programs so we could find a sport we liked and meet other kids,” Christoph said.

“One thing led to another and before long we were playing in a lot of junior tournaments and training in the afternoons at a tennis academy in Portland.”

Christoph started his undergraduate studies at the University of Portland, hoping to play NCAA Division I tennis, but an “injury pretty much killed any chance I had to make that team.”

At about the same time, Whitman tennis coach Jeff Northam ’88 made a recruiting call to the Fuchs home. After a visit to Walla Walla, “I decided to transfer to Whitman, which is one of the best decisions I’ve made in my life to this point.

“Whitman has been perfect for me. It’s been great having a coach like Jeff who understands and really supports the academic as well as the athletic side of what a student athlete goes through.” (Northam earned the George Ball Award for Excellence in Advising, see Page 16.)

Christoph praised the “family atmosphere” that Northam has engendered at the helm of his alma mater’s tennis program.

“Jeff hosted barbecues and pumpkin carvings at his house. There were team dinners and movie nights. Coach had such a huge impact that our team culture seemed to have a life of its own.”

Christoph, a biology major and chemistry minor, said Whitman faculty have been just as supportive. Some of his best Whitman memories include “studying late into the night in the science building and having Tom Knight (assistant professor of biology) spend several hours at a time answering questions and explaining points in great detail.”

There is no question that Whitman’s science program does a superb job preparing students for the medical school admission test and for the rigors that follow in medical school, Christoph said.

“As a transfer student, I can attest to the significantly higher level of difficulty of the classes at Whitman, and I can vouch for a Whitman faculty that goes the extra mile to help you meet and exceed their ambitious expectations.

“When I interviewed at some of the top medical schools in the country, I felt as well prepared as the students from Harvard, Yale and Stanford.”

“Science majors complain at times about having to take so many nonscience classes, but the humanities classes at Whitman have honed my critical thinking, reading and writing skills,” he said. “I owe a lot to Irvin Hashimoto (associate professor of English) and Jim Hanson (professor of forensics) for challenging me to sharpen my writing and public speaking skills.”

While at Whitman, Christoph also took advantage of learning experiences outside the classroom. After his sophomore year, he traveled to Germany and worked more than 200 hours as a nurse’s aide in a hospital in Offenburg. His work ranged from basic patient care to making rounds with doctors and observing surgeries.

The next summer, he received Whitman undergraduate research funding to work on breast cancer research at the University of Louisville’s Brown Cancer Center, the same institution that brought his father to the States decades earlier. The younger Fuchs’ research was the basis of his honors thesis on estrogen receptor protein modifications.

As part of his final year in Walla Walla, Christoph devoted time to the local community, as a tutor for community college students, and as a volunteer at an AIDS clinic and with a program that mentors disadvantaged youth.

With years of medical studies stretched before him, he relished this last spring with his teammates. To have a fourth season with the team, he opted to leave credits unfulfilled until spring term.

“Once I came to Whitman, the tennis team became family. While we’re all going to miss each other and Whitman, we will always treasure the memories we formed together.”