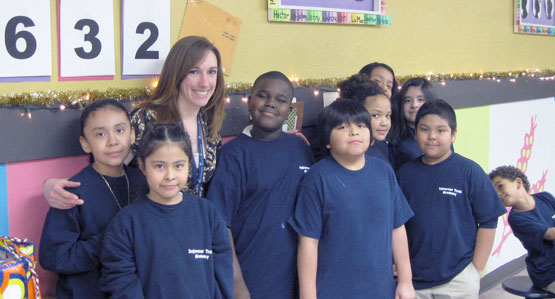 Mary-Eileen Gallagher ’09 and some of the students at Sojourner Truth Academy in Minneapolis, Minn., stand in the school's new Gallagher-inspired “banquet room” lunchroom.

Students fought, threw food and bullied each other during lunch in a Minneapolis inner-city school’s basement cafeteria, a situation that volunteer Mary-Eileen Gallagher ’09 found “bewildering” and set about to change.

First by adding more beauty to their lives: She transformed the windowless room into a “White House banquet room” with a garage-sale chandelier, candle sconces and other decor.

Then by filling idle after-eating time with positive life-changing experiences.

“I knew our students deserved better and could do so much better,” said Gallagher, who recently took students to the actual White House, a trip funded with donations from Whitman professors and others.

Gallagher, a kindergarten and lunchroom assistant at Sojourner Truth Charter Academy in Minneapolis, Minn., is volunteering for a year through the Lutheran Volunteer Corps. She presented her ideas last fall to skeptical students: Transform the lunchroom and invite President Barack Obama to lunch. While waiting for him, they would practice etiquette during Gallagher’s “Manners Mondays.”

Obama hasn’t committed to lunch, yet. But students send letters daily, about 5,000, so far.

While in Washington, D.C, Gallagher and her third- through sixth-grade protégés sat on the Lincoln Memorial steps where Martin Luther King Jr. spoke; were on the U.S. House floor; and toured the White House, discussing artifacts and history with Secret Service agents.

Students have told her they want to be president. At lunch, she hears “pleases” and “thank yous.” She sees students quizzing each other just for fun on information from presidential placemats at the tables.

The young volunteer brought a focus to lunchtime. Students are engaged in the political process and know their elected officials. When Guy walks into the now-pretty lunchroom she hears kids having conversations about politics and history. She sees etiquette in use. The teachers love that when the students return from lunch they’re calm and focused, ready to learn.

“She has made such an impact,” Guy said. “Not just in the lunchroom, but in the kindergarten classroom where she serves as a paraprofessional … tutoring, small group instruction, testing.”

In the nine years Guy has been at Sojourner, the school occasionally has had a prominent visitor attend a school assembly. Now, there are many more visitors, and they sit down for lunch with students and engage in conversation, she said.

She tries not to think about Gallagher leaving in August after her one-year stint is up.

“I try not to think of that. It’s going to be a hard transition.”