The following are excerpts from essays written by former students of Professor Mary Hanna. 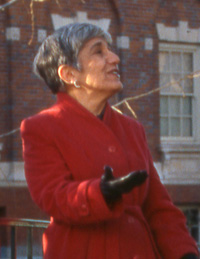 Was it how she said “yuman beings” in that high, fluty voice of hers? What I remember most was being in her house. I felt treated like an adult, and though I didn’t feel like one, I think I rose to the level I was treated. The hard thing for me in imagining her gone is just that pistol quality of hers, that concentrated life force.

Mary always let us turn in our papers at her home on the due date, provided we placed them in the mailbox by midnight. She said she wouldn't accept any papers put there after that time. As far as I know, nobody ever tested her. Papers were usually due on Fridays, and when she came to class on Monday she always told the story of sitting up late and listening to what the students were saying, such as, “Are you sure this is the house?” or “Do you think she’s still awake?”

She was a great and very forgiving teacher. In one of her courses, I was not performing up to her level. The class required four detailed papers on a single subject throughout the semester, and I had submitted two that were under-researched and disappointing. Mary suggested that I was going to have to change topics, which would have been a disaster and more trouble than just doing the original work. That was her way of getting me motivated. I spent the whole weekend researching and redoing the two papers that I had turned in earlier. She gave me a B and a B minus, but I recall her writing, “Much better, and what you should have been doing all along.” She was right.

I had the pleasure of seeing Mary again on an alumni trip a few years ago. We traveled to Philadelphia to see the King Tut exhibit. I remember telling the others on the trip that it was obvious she didn't remember me very well since she said I was one of her “best” students. She corrected me by saying that I was one of her “favorite” students instead.

There are many stories of how Professor Hanna just did something, independent of whatever was expected of her or how it would be perceived. Her motivation usually was that it interested her. She didn't need more incentive than that. She didn't do it to be shocking, make stories or attract attention, but did this (at least I believe she did) from the thinking that exposure to new things could be a lot of fun.

I credit Professor Hanna for developing my sense of identity as an American that makes me very proud to represent our country overseas as a diplomat today. In her classes, we discussed American political culture and the characteristics that define us as a nation, such as optimism, a Protestant work ethic, individualism and a “pull yourself up by your own bootstraps” mentality. These are all traits that continue to shape America’s thinking. Understanding their antecedents makes it easier to explain American policy to foreign audiences.

Professor Hanna used the symbolism of the cowboy to teach us how ingrained that optimism and independence is in our political psyche. I vividly remember how excited she was to show us the classic Western “Shane” and its iconic ending with the cowboy riding off into the mountains alone, despite the protests of a young boy urging him to stay. The music swells dramatically as Shane, our hero, scales the mountain heights in a dramatic landscape as the screen fades to black.

That image of the lone cowboy returned to me when I heard of Professor Hanna’s passing. I, too, wanted to protest her leaving us. Instead, I am imagining her as our heroine astride a trusty steed, tipping her cowboy hat to us with a broad grin and a twinkle in her eye, as she rides off into a beautiful sunset.

One of Mary’s greatest qualities was how much she cared about the individual student. She focused not only on those who excelled in her classes, but perhaps she gave even more to those who struggled. She inspired me to be a sharper thinker, a stronger writer and a better person.

Before classes had started my freshman year, I went to Maxey Hall to find the professor named “Hanna” so I could ask her how I could apply for the 3-3 program between Whitman and Columbia Law School. After I waited outside the door for a while, this little lady comes walking down the hall and asks if she can help me. I said I was looking for Professor Hanna because I wanted to start working toward law school and the course catalog said that she was the program’s contact person. She replied that she couldn’t imagine why anyone wouldn’t want to be at Whitman for four (or more) years. I said, “Um, thanks, but I actually really want to talk to Professor Hanna because I want to …”. At that point she cut me off, said she WAS Professor Hanna, and then treated me to a detailed explanation of all the reasons why I should NOT do what I intended to do. (Some saleswoman for the program, I thought.) But she was right.

Within a few weeks I was hooked on all that Whitman had to offer, becoming more in touch with the idea of college as a time for broad-based learning rather than purely pre-professional training. I was finally, and fortunately, dissuaded of any interest in becoming a lawyer. Obviously becoming a professor of political science was a much more sensible option! And that is what I am today. For this turn in my life, I have Mary Hanna to thank more than anyone else.

Not only did she make learning fun, but she made teaching look fun. She made me want to write more, and she taught me how to receive criticism — and, consequently, how to offer it. I will continue to think of her whenever 18-year-olds come into my office, gasping in their felt necessity to immediately begin planning out the rest of their lives.