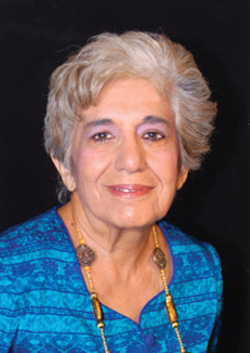 She joined the Whitman faculty in 1982, and served as chair of the Department of Politics and elected chair of the Division of Social Sciences. Hanna, the first woman elected to chair the faculty, taught until 2000.

I met Mary Hanna two decades ago at Whitman. I was a self-conscious teenager looking for a voice. She was this dynamo who had found her own.

Her voice made her memorable. Her extraordinary gifts as a teacher made her unforgettable.

Mary was a good teacher because she was so enthusiastic about teaching and learning. She seemed to enjoy giving a lecture the way normal people might enjoy eating a steak. She relished it, and you could see it in her whole demeanor.

She could be talking about the most dull subject, like the difference between a federation and confederation, and she’d somehow make it riveting. She’d shake her fists in the air or collapse on a desk for dramatic effect. She’d tell stories about everyone from John Adams to Dan Quayle. Even the boys wearing ball caps in the back row would sit up and take notes.

Her classroom was her theater. She was captivating not because of theatrics, however. She so clearly liked thinking about politics, history and culture that her enthusiasm was contagious.

Mary also was a good teacher because she was honest. She respected students enough to assume they could handle the truth. For example, she thought my first proposal for a senior thesis project was weak. She might have used the word “incoherent” (not that I’m still holding a grudge or anything ...). So she told me. By doing so, she challenged me to work doubly hard and prove to her that I had a worthy idea.

Another example: She thought I lived in squalid conditions my senior year. So she told me. I had invited her to see where I lived, in the unfinished basement of an old house, because I was proud of how I’d fixed it up. She came inside and looked past my cool posters and bookshelves to the concrete floor and lack of windows and stinking furnace and she said, in that voice, “Oh, Susan! I had no idea!” She wanted me to move into her house right away. I didn’t, but she had a point. The place was a dump.

Later that year she told me she thought I could make a living as a writer. She told me, and I believed her, because she’d been honest about everything else.

As an aside, I’ll add that Mary might be indirectly responsible for my marriage, too. My husband and I met at Whitman. He might have gone elsewhere, but he attended one of Mary’s lectures while in high school and was so impressed that he soon after settled on Whitman. (To our delight, Mary attended our wedding in 2004. She was, of course, the toast of the party.)

Mary was a good teacher, most of all, because she cared about her students’ education and happiness. We admired her for being intelligent, witty, ladylike, ambitious, irreverent, assertive, grounded and gracious — but we loved her for believing in us. She was a great woman, and she is greatly missed.

Susan Nielsen ’93 is an associate editor at The Oregonian in Portland, Ore.