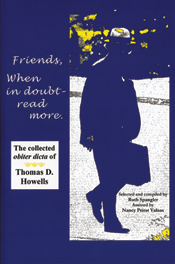 A little inspiration from legendary Whitman Professor Tommy Howells is only a Tweet away. The beloved English professor’s clever asides and anecdotal comments, collected from notes taken by his students during his classroom years (1938-1987), are now available in a book and on Twitter.

This spring Ruth Spangler ’71 published “Friends, When in Doubt — Read More: The Collected obiter dicta of Thomas D. Howells,” items selected and compiled by herself and Nancy Priest Valaas ’68. Spangler wrote about this dear-to-her-heart project in the December 2009 Whitman Magazine.

In a recent e-mail, she revealed the latest chapter in this story: “It might amuse you to know my son, a major Howells fan, has given Tommy Howells a Twitter presence.”

On his blog, Chris Ashworth (son of Spangler and her husband, Jack Ashworth ’71) describes his parents’ dining room table full of paper scraps as she worked on the project. When he read her book, he realized it was tailor-made for Twitter. He plans “a gentle, slow-paced feed of Howells’ quotes from the book.”